UW Symphony and Seattle Symphony: Side by Side

Thursday, January 26, 2017 - 7:30pm
Meany Hall—Katharyn Alvord Gerlich Theater
ALL TICKETS HAVE BEEN RESERVED FOR THIS EVENT (Admission is free, but tickets are required. A waiting list will be started at the box office one hour before showtime. Unclaimed tickets will be released to the waiting list ten minutes before showtime. 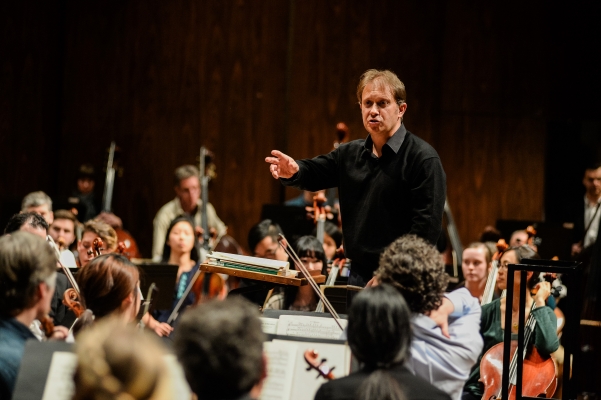 UW Symphony and Seattle Symphony perform side by side on Jan 26 (photo: Jerome Tso).

Ludovic Morlot and David Alexander Rahbee share conducting duties in this program of performances by the UW Symphony and members of the Seattle Symphony, performing both separately and side-by-side. With special guests Kevin Ahfat, piano; and Gabriel Palmer, trumpet.

*Note: DUE TO POPULAR DEMAND, TICKETS ARE NO LONGER AVAILABLE FOR THIS EVENT. A waiting list will be started at the box office one hour before showtime and all unclaimed tickets will be released to the waiting list ten minutes before showtime. Patrons must be present to add names to waiting list.

Copland: Fanfare for the Common Man

As a pianist that “leaves no question about his riveting presentation and technical finesse” (Seattle Times), Ahfat is an artist recognized for his deeply passionate and highly compelling performances, possessing “a balanced mix of expressiveness and virtuosity” (Musical America).  He has appeared as a multi-faceted solo and chamber artist at venues nationally and internationally, most notably at Boettcher Hall in Denver, Benaroya Hall in Seattle, Ikeda Theater in Arizona, Carnegie Hall and Alice Tully Hall in New York, and Japan’s Fumin Hall in Kyoto.

Currently, Mr. Ahfat is continuing his studies at the Juilliard School in New York under the tutelage of Mr. Joseph Kalichstein and Mr. Stephen Hough after having previously studied with Mr. Choong-Mo Kang, as well as with Dr. Lei Weng and Larry Graham.  As chamber artist, he has coached with Itzhak Perlman, Joseph Lin, Vivian Weilerstein, Catherine Cho, David Finckel, and Seymour Lipkin.

At Juilliard, Mr. Ahfat holds the Rhea Cloe and Carl Cloe Memorial Scholarship, the Herbert Stessin Piano Scholarship, and the Susan W. Rose Piano Fellowship.  In addition, he is actively involved in community outreach initiatives, and has worked with the Music Advancement Program at Juilliard and was a mentor and coach for the MERIT Outreach Program at the Music Academy of the West.  He is a 2015-16 Artist of the Young Musicians Foundation of Colorado and is especially grateful for their support.

French conductor Ludovic Morlot is Music Director of the Seattle Symphony. There have been many highlights during his first three seasons in this position, including an exhilarating performance at Carnegie Hall in May 2014, as reported in The New York Times: ‘The performance Mr. Morlot coaxed from his players was rich with shimmering colours and tremulous energy.” During the 2014-2015 season Morlot and the Seattle Symphony will continue to invite their audiences to “listen boldly,” presenting a wide variety of works ranging from Mozart’s Requiem, Dvořák’s last three symphonies, Berlioz’s Roméo et Juliette and Mahler’s Symphony No. 3, to Ives, Dutilleux and Salonen, as well as premieres by Sebastian Currier, Julian Anderson and Trimpin. Complemented by the Seattle Symphony’s highly innovative series, Symphony Untuxed and [untitled], this season will also see the release of several more recordings on the orchestra’s new label, Seattle Symphony Media.

Morlot was also Chief Conductor of La Monnaie, one of Europe’s most prestigious opera houses, for three years (2012-2014). During this time he conducted several new productions including La Clemenza di Tito, Jenůfa and Pelléas et Mélisande. Concert performances, both in Brussels and Aix-en-Provence, included repertoire by Beethoven, Stravinsky, Britten, Webern and Bruneau.

During the 2014-2015 season Morlot will return to both the Los Angeles Philharmonic and the Chicago Symphony Orchestra. He has a particularly close relationship with the latter, with whom he will conduct two subscription weeks, including the world premiere performance of Anne Clyne’s Violin Concerto. He also has a strong connection with the Boston Symphony Orchestra whom he conducts regularly in Boston and Tanglewood and recently on a tour to the west coast of North America. This relationship started in 2001 when he was the Seiji Ozawa Fellowship Conductor at the Tanglewood Music Center and subsequently appointed Assistant Conductor for the orchestra and their Music Director James Levine (2004-2007). Morlot has also conducted the New York Philharmonic and the symphony orchestras of Cleveland, Pittsburgh and Philadelphia.