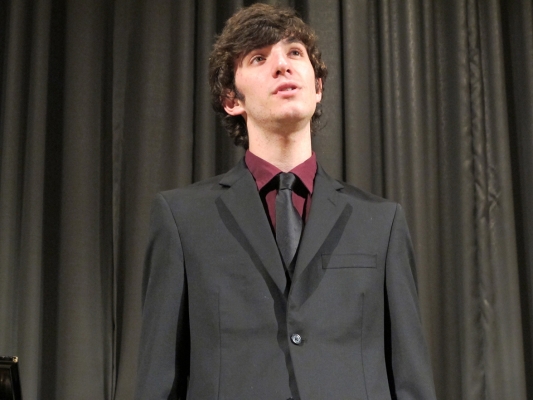 Students of Thomas Harper, Kari Ragan, and Cyndia Sieden perform art songs and arias from France, Germany, Italy, and beyond.

Thomas Harper is Associate Professor of Voice and Director of the Opera Theater at the University of Washington. In addition to voice instruction and direction of opera productions, he holds classes in Diction, Vocal Pedagogy, and Art-Song Repertoire.

He has performed for three decades in opera houses and concert halls in Europe and the Americas, including Deutsche Oper Berlin, Hamburgische Staatsoper, Grand Théâtre de Genève, RAI Torino, Orchestre de la Suisse Romande, Dallas Opera, Seattle Opera, Téatro Municipal de Santiago, Chile, and many others. He has amassed a wide and varied repertoire of over fifty roles including the “Duke” in Rigoletto, “Rodolfo” in La Bohème, “Radames” in Aida, “Canio” in I Pagliacci, “Eléazar” in La Juive, “Florestan” in Fidelio, “Erik” in Der Fliegende Holländer, “Parsifal” in Parsifal, “Alwa” in Alban Berg’s Lulu, “Gregor” in Leoš Janá?ek’s Makropoulos Affair and “Mime” in Richard Wagner’s Der Ring des Nibelungen, which he also recorded on the Arte Nova label. He has won enthusiastic praise for the role of “Fritz” on the Naxos recording of Franz Schreker’s opera Der Ferne Klang and for his definitive interpretation of “Mime” in Der Ring des Nibelungen in numerous European and American opera houses. He may also be heard on the Naxos label singing Famous Tenor Arias from the Italian repertoire as well as Gustav Mahler’s Lied von der Erde with the Irish National Orchestra.

Soprano Kari Ragan holds degrees from Indiana University (BM, MM) and the University of Washington (DMA). Her dissertation, “The Ballad of Baby Doe: Historical Accuracy and Gender Ideology in the Characterization of August and Baby Doe,” focused on feminist perspective of Douglas Moore’s 1956 opera.

In 2012, Dr. Ragan was the recipient of the Van L. Lawrence Fellowship, a prestigious award presented jointly by The Voice Foundation and the National Association of Teachers of Singing (NATS). Her research topic for this fellowship is “The Parameters and Utility of Vocal Cool Down Exercises.” In 2011, she earned the Wicklund Singing Voice Specialist Certificate and in 2010 the New York Singing Teachers (NYSTA) Association’s Distinguished Voice Professional Certificate. Dr. Ragan was selected to present at the 51st NATS National Conference on Voice Disorders and the Multidisciplinary Team. In 2009, she was the recipient of the NATS Pedagogy Award. Dr. Ragan’s article “Intubation Considerations for Singers” was published in the NYSTA’s VOICEPrints in 2010 and the augmented article co-written with anesthesiologist Dr. Kunal Gangopadhyay, will be published in the Journal of Singing in the fall of 2012. Additionally, her article entitled “The Connected Voice Studio” was published in the Journal of Singing in September 2010.

Dr. Ragan joined the University of Washington voice faculty in the fall of 2010 where she teaches graduates and undergraduates applied voice, vocal pedagogy, Italian diction, and French art song literature. Additionally, she has developed and maintained a thriving and collaborative independent voice studio for over twenty-five years.

Although her primary training, performing, and teaching is in the classical genre, she has also specialized in Contemporary Musical Theater (CMT) pedagogy and as a Singing Voice Specialist (SVS)—a voice teacher with specialized training in helping the injured voice. Her work in this area is in association with a team including Laryngologists and Speech Language Pathologists (SLP). As a result of her three specialties (classical pedagogy, CMT pedagogy and an SVS) she is frequently sought after as a clinician and adjudicator for workshops and masterclasses throughout the Pacific Northwest. Dr. Ragan is a member of NYSTA, an organizing member of the Northwest Chapter of the Voice Foundation (NWCVF), has served on the board of the Puget Sound Chapter of NATS, and is a member of Northwest Artists.

As an active performer she has sung with such companies as Seattle Opera, Spokane Opera, Fort Collins Symphony, Helena Symphony, Washington East Opera, Spokane Symphony, Lyric Opera Northwest, and Opera Idaho, among others. In addition, she is a frequent recitalist, having recently presented a series of recitals, throughout the Northwest, with Maestro Dean Williamson at the piano. She has been recognized as the Regional finalist for the Metropolitan National Council Competition and the MacCallister Competition.