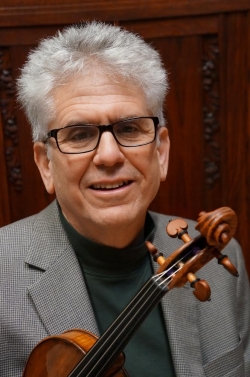 Herbert Greenberg, a leading faculty member at the Peabody Conservatory, leads a free master class for UW string students. Mr. Greenberg will also be joining the UW Symphony Orchestra as guest concertmaster for the special performance of "Defiant Requiem: Verdi at Terezín."

Herbert Greenberg, a native of Philadelphia, studied with Jascha Brodsky and Ivan Galamian, and his further studies at Indiana University with the great pedagogue Josef Gingold led to a Performer's Certificate. Mr. Greenberg has been a member of the Minnesota Orchestra; associate concertmaster of the Pittsburgh Symphony; and, from 1981 to 2001, served as concertmaster of the Baltimore Symphony Orchestra. He has performed over 50 concerti from the baroque to present day American composers such as Adams and Rouse. Mr. Greenberg has collaborated as a soloist with many of the world's leading conductors including William Steinberg, Andre Previn, Leonard Slatkin, Sergiu Comissiona, Gunther Herbig, Hans Vonk, Pinchas Zukerman, Nicholas McGegan, Kazimerz Kord, Emmanuel Krivine, Joseph Silverstein, Jaime Laredo, Alan Gilbert, and David Zinman. He has performed as soloist in Carnegie Hall to critical acclaim. Many of his performances have been broadcast on NPR, and he was featured in Strauss's Ein Heldenleben on national television celebrating the inaugural concert at Joseph Meyerhoff Symphony Hall in Baltimore.

Mr. Greenberg has concertized throughout North America, Europe, and Asia. He has toured as soloist with the Aalborg Symphony Orchestra of Denmark and has led the New Arts Ensemble of Taipei as violinist/conductor on a tour throughout Taiwan. Mr. Greenberg was the first American invited to serve as the concertmaster for the Japan Virtuoso Symphony Orchestra, an ensemble consisting of concertmasters and first chair players from all over Japan as well as the Berlin, Vienna, Munich, and the Tel Aviv Philharmonic Orchestras. Recently, Mr. Greenberg has performed in Budapest, the Czech Republic, and served as violinist/conductor of the Singapore Symphony. He has also served on international juries for the most recent Szymanowski and Wieniawski Competitions. Mr. Greenberg has been invited to serve as guest concertmaster for the Houston, St. Louis, San Diego, Atlanta, and Oregon symphonies, as well as the National Arts Orchestra of Canada, Prague Symphony, Mav Orchestra of Budapest, and the Bergen Filharmoniske Orkester of Norway.

With pride, Mr. Greenberg has been associated with and serves as concertmaster for the Defiant Requiem Foundation. Mr. Greenberg performed at the first performance in Theresienstadt and is devoted to getting the story of life in the Terezin Ghetto told. He has performed works of Klein, Kraza, Haas, and Ullman at Terezin and served as concertmaster for the award winning film, Remember the Holocaust: Defiant Requiem.

In Minneapolis he was a member of the Minnesota Chamber Soloists.  In Pittsburgh he was a founding member of the Previn-Greenberg-Williams Trio and, in Baltimore, a founding member of the Baltimore String Quartet. He has collaborated in chambcer music with a wide variety of artists such as William Primrose, Michael Tree, Isaac Stern, Josef Gingold, Jaime Laredo, Pinchas Zukerman, Malcom Frager, Josef Kalichstein, Lynn Harrell, Yo-Yo Ma, Edgar Meyer, and Barry Tuckwell. Mr. Greenberg has participated in many festivals and seminars such as New York String Seminar, NOI, Sarasota, and Blossom Festivals. For the past 16 seasons he has been a member of the faculty and concertmaster of the Aspen Music Festival and School.

Mr. Greenberg has been a member of the violin faculty at the Peabody Conservatory since 1987 and is currently serving as faculty chair. He is also very active in leading master classes, most recently at LSU, CCM, YST, and Juilliard.  Many of his former students are faculty members, have chamber music careers, and occupy concertmaster and principal positions in major symphony orchestras throughout the world. Mr. Greenberg's students are members of orchestras such as Baltimore, Cleveland, Chicago, Philadelphia, San Francisco, Pittsburgh, National, Seattle, Oregon, Houston, St. Louis, Montreal, KBS, Danish Radio, and Israel Philharmonic. Mr. Greenberg has recorded for Sony, Telarc, Argo, and Delos.  He plays on the Jean Becker Stradivarius, dated 1685.