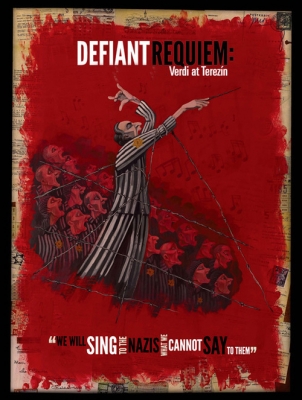 Members of the Seattle Jewish Chorale

Jewish prisoners in the Terezín Concentration Camp experienced the worst of human degradation yet performed Verdi’s Requiem 16 times with only a single smuggled score, including one performance before senior SS officials from Berlin and an International Red Cross delegation. Imprisoned conductor Rafael Schächter told the choir, “We will sing to the Nazis what we cannot say to them.” In this concert-drama, guest conductor Murry Sidlin leads the University Symphony and combined UW Chamber Singers and University Chorale in performing Defiant Requiem: Verdi at Terezín. Sidlin, founder and director of the Defiant Requiem Foundation, conceived and created this concert-drama combining the music of Verdi with video testimony from survivors of the original Terezín chorus as well as footage from the 1944 Nazi propaganda film about Theresienstadt. The performance includes actors who speak the words of  conductor Rafael Schächter and others.

Murry Sidlin is a conductor with a unique gift for engaging audiences; he maintains a diverse and distinctive musical career. He is the founder and president of The Defiant Requiem Foundation, an organization that sponsors live concert performances of Defiant Requiem: Verdi at Terezín, as well as other projects, including the documentary film, Defiant Requiem, and The Rafael Schächter Institute for Arts and Humanities at Terezín. He lectures extensively on the arts and humanities as practiced by the prisoners of the Terezin Concentration Camp, and has developed a second concert drama which illuminates the compositions of fifteen composers who were imprisoned at Terezin. The concert drama is entitled “Hours of Freedom: the Story of the Terezin Composer”.  He is a distinguished teacher of conducting and performs throughout the world in the traditional concert hall.

Mr. Sidlin began his career as assistant conductor of the Baltimore Symphony under Sergiu Comissiona and then was appointed resident conductor of the National Symphony Orchestra by Antal Doráti. He has served as music director of the New Haven and Long Beach (California) Symphonies, the Tulsa Philharmonic, and the Connecticut Ballet.  For eight years he was resident conductor of the Oregon Symphony. From 2002 to 2010, he served as Dean of the School of Music at The Catholic University of America in Washington, D.C., where he currently teaches advanced conducting.  Murry Sidlin was principal guest conductor of the Gävleborgs Symfoniorkester in Sweden, and was artistic director of the Cascade Festival of Music in Bend, Oregon for twelve summers. He has conducted more than 100 concerts with the San Diego Symphony, and has conducted eighteen consecutive New Year's Eve Galas at the John F. Kennedy Center for the Performing Arts in Washington, DC with the National Symphony Orchestra. Mr. Sidlin served as resident artist/teacher and associate director of conducting studies at the Aspen Music Festival for thirty-three summers, where, with conductor David Zinman, he developed the American Academy of Conducting.

While at the Oregon Symphony, Murry Sidlin created the nationally recognized Nerve Endings series (now entitled Illuminations). This series featured innovative concerts designed to attract and engage new audiences and expand the traditional role of the symphony orchestra. Each program was designed, written, and conducted by Mr. Sidlin and attracted hundreds of new subscribers each season. See the "Illuminations Concerts" page for a list of available concerts.

In April of 2002 Murry Sidlin presented the first performances of the concert-drama, "Defiant Requiem: Verdi at Terezín", in Portland, Oregon. Since the premiere, he has led a total of thirty performances, including three performances in the Czech town of Terezin, the site of the Theresienstadt concentration camp.  The June 2009 performance served as the conclusion to an International Holocaust Conference attended by nearly 800 delegates from 47 nations. On May 9, 2010, Defiant Requiem was presented to an audience of 5,000 people in Budapest, Hungary and televised live on Danube Television throughout Eastern Europe. Recent performances were presented in Jerusalem; Berlin; at St. Vitas Cathedral in Prague at the invitation of H.E. Cardinal Dominik Duka; Boston; Avery Fischer Hall, NYC; Oklahoma City; Tulsa, Oklahoma; and San Diego. On May 17th, 2015 the premiere of the new concert drama, “Hours of Freedom: the Story of the Terezin Composer” was presented on the grounds of the former Nazi concentration camp, Terezin, Czech Republic.

In 1987, Murry Sidlin collaborated with the celebrated American composer Aaron Copland to arrange and orchestrate a new chamber ensemble version of Copland’s full-length opera The Tender Land. Later, he created a suite from the opera to serve as a companion work to Copland’s chamber version of Appalachian Spring. He toured throughout midwest farms presenting The Tender Land, portions of which were featured on CBS Sunday Morning six times as "Opera on the Farm". Mr. Sidlin has performed the chamber ensemble version of The Tender Land over 200 times and has recorded both the full-length opera and the suite for KOCH International. For the same label, he recorded Piazzolla’s tango opera Maria de Buenos Aires, with the Third Angle New Music Ensemble of Portland, Oregon.

Murry Sidlin studied with legendary pedagogues Leon Barzin and Sergiu Celibidache. He was appointed by Presidents Ford and Carter to serve on the White House Commission of Presidential Scholars.  He won national acclaim for the television series Music Is…, a ten-part series about music for children that was seen over the PBS network for five years. In 1997 the National Association of Independent Schools of Music recognized Mr. Sidlin as Educator of the Year. He has been featured on NBC’s Today Show, ABC’s Good Morning America, and several times on CBS Sunday Morning. Most recently he was asked to appear on CNN International to speak about Defiant Requiem. In May of 2011 Mr. Sidlin received the Distinguished Alumnus Award from his alma mater, the Peabody Conservatory of Music of The Johns Hopkins University. The Award honors alumni who have typified The Johns Hopkins tradition of excellence and brought credit to the University by their personal accomplishments, professional achievement, and humanitarian service.  In September of 2011, the Archbishop of Prague presented Mr. Sidlin with the medal of St. Agnes of Bohemia for his dedication to illuminating the legacy of Terezín.  In January 2013, Mr. Sidlin was nominated to the International Board of Governors of the Jerusalem Academy of Music and Dance. In June of 2013 Murry Sidlin received the Simon Wiesenthal Center’s Medal of Valor for his continued efforts to illuminate the Terezin legacy.