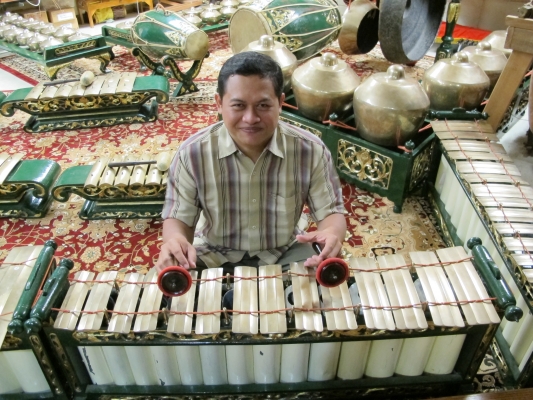 The master Javanese gamelan musician Heri Purwanto from Indonesia performs with his students in this evening of music from central Java, Indonesia.  Joining Heri Purwanto and his students are guest musicians Jarrad Powell, Stephanie Shadbolt, and Jesse Snyder.

Join Us After the Show

Following the concert, join us for light refreshments at our post-show reception. The reception is free and open to the public, but registration is required. RSVP onsite or by following the link below:

Heri Purwanto, a highly respected teacher, performer, and master musician of Javanese gamelan, comes from a family of musicians in Wonogiri, Central Java.  After graduating from the college level academy (now Institut Seni Indonesia) in Surakarta, Central Java, at the top of his class in 2000, he taught gamelan at the University of California-Berkeley, from 2001 to 2004 and directed the Berkeley based ensemble Gamelan Sari Raras.  Since returning to Java in 2004, Heri has continued his work as an artist, building and running an arts studio in his community as well as performing as a musician throughout Indonesia, as well as in Singapore, Thailand, China, and across the United States.  He has been a Visiting Artist in the Ethnomusicology Program at the University of Washington in 2011 and 2014, and has performed with the Seattle-based ensemble Gamelan Pacifica.  From 2014 to 2016 he taught gamelan at Earlham College in Richmond, Indiana, where he was in residence on a Fulbright award during the 2014-2015 year.