Indigo Mist at the Royal Room 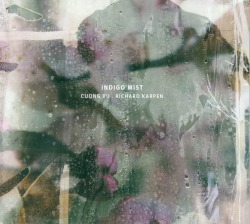 Note: This show is hosted and ticketed by the Royal Room.

Initially the brainchild of electro acoustic pioneer/composer Richard Karpen and Cuong Vu, Indigo Mist has become a vehicle for the musical musings of a group of forward reaching artists with tendencies towards experimentation. Having crossed paths over the years as University of Washington music faculty, the group is currently comprised Vu, Karpen, electro-acoustic composer and DXARTS director Juan Pampin, Ted Poor, whose prodigious drumming has recently been enlisted by Chris Thile and Andrew Bird, and 15 time Grammy winner, bassist/producer Steve Rodby.

Critics have described the Indigo Mist’s 2014 recording as “…gorgeous, far out, haunting, and evocative…In a word: special” (Outside Inside Out), “Mysterious, provocative, fanciful” (Something Else). Stereophile states, “Cuong Vu is a postmodern jazz trumpeter…[pianist/composer] Richard Karpen is director of the School of Music at the University of Washington…When these two got together, the shit hit the fan.”

Acoustic and electric bassist, audio and video editor and producer Steve Rodby was born in Joliet, Illinois. He began studying classical orchestral bass at age 10, and quickly developed parallel interests in pop and jazz. A graduate of Northwestern University with a degree in classical bass performance, Steve spent many years as a multi-style studio musician on both acoustic and electric bass in Chicago recording studios, while also playing with the leading contemporary classical chamber music group in the city, the University of Chicago's CCP. Playing regularly at the Jazz Showcase also gave him the opportunity to play with numerous jazz masters. In 1981, Steve joined the Pat Metheny Group, and would play with the PMG for 3 decades. Steve also started, in the early 80s, producing records for the PMG and many others, as well as working as a video editor for both PBS music specials and other music DVDs. In all, Steve has won 15 Grammy awards. Recently, Steve has been touring and recording with the international group The Impossible Gentlemen.

Ted Poor is a Seattle-based drummer whose adventurous, soulful playing has vaulted him to the stages of some of today’s most important musicians and placed him amongst those drummers most in demand. After graduating from the Eastman School of Music in 2003, Ted moved from his hometown of Rochester, NY to New York City, where he quickly made a deep impression on its jazz and indie-rock music communities. In his ten years in NYC Ted appeared on dozens of recordings and shared the stage with many world-renowned artists such as Bill Frisell, Pat Metheny, Kurt Rosenwinkel, Cuong Vu, Ben Monder, Myra Melford, Mark Turner, Gabriel Kahane, My Brightest Diamond, Aaron Parks, and Ralph Alessi.

Now a resident of Seattle, Ted has joined the band of Los Angeles based singer/song-writer Andrew Bird; appearing on and touring the albums Are You Serious and My Finest Work Yet (Loma Vista/Concord). As his presence in the Los Angeles music community has grown, Ted has collaborated with producers and artists such as Michel Froom, Blake Mills, Tony Berg and Madison Cunningham – appearing on Cunningham’s recent release Who Are You Now (Verve). Ted also performs regularly on the live radio broadcast of Live From Here with Chris Thile.

In the fall of 2018, Ted signed with record label New Deal (Verve/Universal) and is currently finishing his debut release You Already Know, a collaboration with saxophonist Andrew D’Angelo and producer Blake Mills. Ted is currently an Assistant Professor of Jazz Studies at the University of Washington in Seattle. Ted endorses C&C Drums.