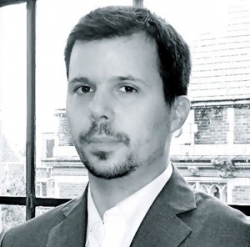 Assistant Professor of Composition Huck Hodge has been awarded one music's highest honors--the Rome Prize in Music Composition. The award was conferred on April 15th during a ceremony in New York City. The Rome Prize is among the most prestigious awards in any artistic or humanistic field and is especially prominent in Music. Hodge will spend a year in residence as the Luciano Berio Fellow in Music Composition at the Villa Aurelia, a palace built c. 1650 for Cardinal Girolamo Farnese.

In addition to winning the Rome Prize, Hodge was also named the alternate for the Berlin Prize from the American Academy in Berlin. In the coming year, his music will be performed by preï¿½minent ensembles in New York, Sydney, Amsterdam, Paris, Berlin, Rome and Seattle.

Established in 1894 and chartered by an Act of the United States Congress in 1905, the American Academy in Rome is a center that sustains independent artistic pursuits and humanistic studies. It is situated on the Janiculum, the highest hill within the walls of Rome.

The Academy awards the prestigious Rome Prize to a selected group of artists and scholars invited to Rome to pursue their creative goals in an atmosphere conducive to artistic innovation and progressive scholarship. Areas of study for artists include architecture, landscape architecture, design, historic preservation and conservation, literature, musical composition and visual arts. For scholars, fellowship areas include ancient, medieval, renaissance and early modern or modern historical studies.