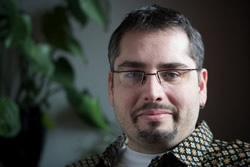 The $5,000 cash award is given annually to support the creation of new choral music. This year's award will be presented June 18 at Chorus America's national conference in Atlanta, Georgia.

Banks will compose a work to be entitled This delicate universe, an a cappella cycle for 16-part chamber chorus based on five poems by the Greek-Egyptian poet Constantine Cavafy. The piece will be performed in both Greek and English and will be premiered by Conspirare within the next two years.

The award is made possible by the Dale Warland Singers Fund for New Choral Music, established in 2004 to honor Warland, a conductor and composer known for his contributions to the choral arts and to contemporary choral music.

Banks is noted for his commitment to new music for unaccompanied voices. In 1992, Eric founded The Esoterics, a professional-caliber chamber chorus of volunteers in Seattle whose mission is to perform and perpetuate contemporary choral music beyond the scope of the established a cappella canon.

Banks has taught music theory, musicianship, composition, and voice at Cornish College of the Arts since 2004. He has been a visiting scholar at the Royal Conservatory of Music and Swedish National Radio in Stockholm (1997-1998), as well as at the Cama Oriental Institute in Bombay, India (2006-2007).