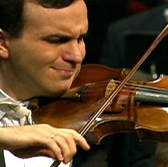 Admission to the master class is free and open to the public.

Shaham will be in Seattle to perform Bela Bartok's Violin Concerto No. 2 with the Seattle Symphony on Thursday, January 6 and Saturday, January 8.

Among his more than two dozen concerto and solo CDs are a number of best sellers, appearing on record charts in the U.S. and abroad. These recordings have earned prestigious awards, including multiple Grammys, a Grand Prix du Disque, a Diapason d'Or l'Annee, and a Gramophone Editor's Choice.

Shaham's recent recordings have been produced for his own label, Canary Classics, most recently, a recording of works by Spanish composer Pablo de Sarasate with the Orquesta Sinfï¿½nica de Castilla y Leï¿½n and Alejandro Posada that was released in autumn 2009.

Shaham was born in Champaign-Urbana, Illinois, in 1971. He moved with his parents to Israel where, at age seven, he began violin studies with Samuel Bernstein. In 1981, while studying with Haim Taub in Jerusalem, he made debuts with the Jerusalem Symphony and the Israel Philharmonic.

That same year, he began his studies with Dorothy DeLay and Jens Ellerman at Aspen. In 1982, after taking first prize in Israel's Claremont Competition, he worked with DeLay and Hyo Kang at The Juilliard School. He also studied at Columbia University. He plays the 1699 Countess Polignac Stradivarius and lives in New York City with his wife and their two children.