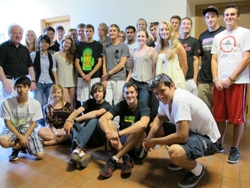 Twenty-six freshmen getting an early start on their University of Washington studies are discovering music close to the edge in a course developed by Percussion Studies chair Tom Collier.

The course, titled "Close to the Edge: A Survey of Important 20th Century Music Outside of the Mainstream from Abe to Zappa," is one of about twenty early-entry classes for freshmen taking place between Aug. 22 and Sept. 19 as part of the UW's Discovery Seminar program.

Collier says he hopes the course will open students' ears to new music and give them lifelong-learning techniques for critical listening and music appreciation. "The 20th Century produced an amazing number of important composers, musicians and bands whose music explored the outer bounds of traditional mainstream genres," Collier says of the new course, offered under the General Studies heading. "Some of these musical pioneers--including LaMonte Young, Terry Riley, Conlan Nancarrow, Edgar Verese, Cecil Taylor and Albert Ayler--remain somewhat obscure to most audiences. Other artists, such as Thelonious Monk, Phillip Glass, The Beatles, Frank Zappa or John Coltrane, may be more familiar since at least part of their careers probably involved commercial or popular music."

All of the afore-mentioned musicians and composers made substantial contributions to 20th Century music and in many cases, influenced popular musical styles, Collier says. "LaMonte Young is cited by John Cale of The Velvet Underground as being 'the best part of my education and my introduction to musical discipline.' Noted pop music producer Brian Eno likewise credited Young's music as 'a cornerstone of everything I've done since.' Frank Zappa, an important innovator himself, found Edgar Verese to be one of his musical role models, while John Lennon of The Beatles was listening very carefully to Karlheinz Stockhausen and John Cage during the making of the landmark rock albums Revolver and Sgt. Pepper's Lonely Hearts Club Band. Pete Townshend of the British band The Who was so enamored with Terry Riley's music that he celebrated the composer in the song 'Baba O'Riley' in the 1971 Who's Next album."

Collier says he hopes that the class will raise students' awareness of innovative creators of music whose artistic output might have been missed by mainstream audiences but who were extremely influential on serious musicians and composers regardless of style. In keeping with the "Discovery" theme, he says, the class "will provide an opportunity for students to explore music not heard through normal channels while making connections with that music to more popular styles that borrowed concepts from important musical explorers."