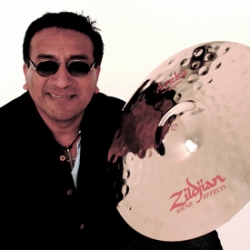 Drummer Alex Acuna will appear with Collier and Dean Nov. 18 at the Meany Studio Theater

The series kicks off on Friday, November 18 at the Meany Studio Theater with a performance spotlighting guest drummer Alex Acuña, who achieved acclaim in the 1970s through his work with jazz fusion group Weather Report as well as many other well known artists and ensembles.  The series continues Friday, March 2 at Brechemin Auditorium with a concert featuring drummer Ralph Humphrey, known for his work with rock icon Frank Zappa and concludes on Friday, May 11 at Brechemin Auditorium with a performance featuring New-York based drummer Ted Poor, known for his work with trumpeter and School of Music faculty artist Cuong Vu.

Seattle bassist Dan Dean, Collier’s musical partner for going on five decades, joins Collier and guests on all three performances. Collier and Dean got their start as a duo as young men performing with the Collier Family at USO shows for Vietnam-bound troops at Fort Lewis and other points west. They eventually progressed to recording and performing in concert with artists such as Ernie Watts, Don Grusin, Ry Cooder, Howard Roberts, Bobby Shew, Frank Zappa, Alex Acuna, Emil Richards, Shelly Manne, Bud Shank, Bill Smith, and Gary Herbig, to name a few.

All concerts in this series are at 7:30 p.m. Tickets for the November 18 Meany Studio Theater performance are available in advance at www.meany.org or by calling the Arts Ticket Office at 206.543.4880.  Tickets for the March 2 and May 11 performances at Brechemin Auditorium are available at the door starting thirty minutes before the performance.  For details, please visit the School of Music events calendar here.

UPCOMING EVENTS IN THIS SERIES