Huck Hodge awarded commission by Music at the Anthology 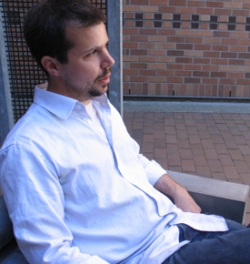 Huck Hodge, an assistant professor of Composition at the School of Music, has been awarded a commission by Music at the Anthology for a piece composed for Boston-based new music group the JACK Quartet. Hodge's piece was among three selected from more than 500 submissions. The work will premiere in New York in April 2012 followed by a special performance in Seattle on May 18 when the JACK Quartet performs a concert by UW composers at the UW's Jones Playhouse.

The JACK Quartet, which has established an international reputation for electrifying presentations fo today's most demanding works for string quartet, wil perform its Seattle concert at the conclusion of a week-long residency at the School of Music May 14 through 18, 2012. Along with the concert, which will feature works by UW composers Joël François Durand, Richard Karpen, and Juan Pampin, residency activities will include workshop readings of composition student works, a strings master class, and more.

Details of the group and its May 18 appearance at the UW are available here.