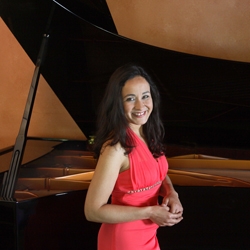 Geisa Dutra, ('88 MM Piano Performance) is the featured soloist with Philharmonia Northwest February 5 in Homage, a program celebrating the music of Brazilian composer Heitor Villa-Lobos. Dutra will solo on the group’s performance of Bachianas Brasileiras No.3 for piano and orchestra. Composed in 1938, it pays homage to J. S. Bach in a combination of baroque contrapuntal textures and rhythmic patterns with Brazilian folklore. Also on the program are Villa-Lobos’ Sinfonietta No.1 and Mozart’s Symphony No. 31, conducted by Philharmonia’s new conductor, Julia Tai ('10 DMA, Orchestral Conducting).

Dr. Richard Sparks (BM ‘75; ‘80 MM Choral Conducting) has been Professor of Music at the University of North Texas since 2009. He is chair of the Division of Conducting and Ensembles and also conducts both the Chamber Choir and Collegium Singers. The Collegium Singers are a part of UNT's strong period instrument/early music program and were one of five college/university ensembles invited to participate in the Boston Early Music Festival in June 2011.

Sparks, founder of Seattle Pro Musica and Choral Arts Northwest, two organizations approaching their 40th and 20th anniversaries, respectively, recently completed twelve years as Artistic Director of Pro Coro Canada in Edmonton, Alberta, one of three professional chamber choirs in Canada, with whom he made several tours of Eastern Canada.