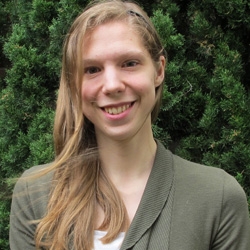 As principal saxophonist of the Wind Ensemble and member of the UW Saxophone Quartet, recent School of Music graduate Melissa Winstanley has consistently proven herself to be an exceptional student and a talented and dedicated performer. But she recently received much broader recognition of the highest order for her academic record at the UW when she was named the University’s 2012 President’s Medalist, a distinction awarded to the most accomplished student in the UW’s 7,500 member senior class.

With this recognition, Winstanley joins a long roster of accomplished alumni who have received the President’s Medal since 1932, the first year it was awarded by the UW President to the graduating senior with the most distinguished academic record.

A 2008 alumna of Bellevue High School, Winstanley graduated with University Honors on June 9 with dual degrees in Computer Science and Music. She has carried an ambitious class and workload during her time at the University, earning top marks in all of her coursework while simultaneously serving as an Honors Peer Mentor, a teaching assistant in Computer Science, and completing a year-long honors research project on mobile tools for public health, an internship with Google, a research internship with UW’s Community Ecology Lab, and study abroad programs in Rome and Istanbul. A member of Phi Beta Kappa, she also was an Honors Undergraduate Scholar, a National Merit Scholar, and an American Association of University Women Math Scholar.

Somehow, on top of all of her other commitments and accomplishments, she also finds time to practice. As a member of the Wind Ensemble, she participated in the 2010 tour of Japan and last fall was featured, along with other members of the UW Saxophone Quartet, on William Bolcom's Concerto Grosso for Saxophone Quartet and Wind Ensemble.

“Every year she has made a significant contribution through her quiet confidence and musical leadership,” says Professor Timothy Salzman, head of the University’s band programs and Winstanley’s director in the Wind Ensemble. "She is always ultra-prepared for rehearsals and performances. She's an exceptional person—gifted, humble, and very much into giving of herself to help those around her. This could not have happened to a nicer person.”

Immediately following graduation, Winstanley launched into a second internship with Google, which will keep her busy through this summer. In the fall, she returns to UW to pursue graduate studies in computer science and engineering, with plans to become a software engineer. Music also figures into her immediate plans, according to Michael Brockman, head of the Saxophone Studio. “Her hope is to continue playing in the UW Wind Ensemble and the UW Saxophone Quartet next year, so her heart is still with us despite her embarking on a career in computer code,” he says. “In any event, she is one of the best classical saxophonists we have produced in years.”