The University of Washington Wind Ensemble (MUSEN 301/501) is the select wind ensemble at the UW and is comprised of the finest wind and percussion players on campus. Membership, based on audition, is open to the entire student body regardless of major field of study.
In addition to performances throughout the year at Meany Theater, recent off-campus performances of note include appearances at prestigious music conventions and several concerts at Benaroya Hall at the invitation of the Seattle Symphony. The London Financial Times review of one of those concerts applauded “music of surprising sophistication…Cindy McTee’s Finish Line pulsated energetically and William Bolcom’s Song was simply gorgeous.”
In addition to collaborating with a number of internationally renowned guest artists, conductors, and composers, the Wind Ensemble has undertaken several international tours, including trips to Japan in 2004, 2007, and 2010, and to China in 2013 and 2019.  The ensemble’s appearances at prominent concert venues in Beijing included a sold-out concert at the National Center for the Performing Arts in Tiananmen Square, broadcast nationwide on China Central Television.
More information about the Wind Ensemble is available here: www.uwbands.com
Director:

The Wind Ensemble (MUSEN 301/501) at UW performs a repertoire of classic, contemporary and newly commissioned music. This group offers a high level of musical challenge and opportunity for large group, chamber and one-on-a-part performance experiences. Membership is open to students from all schools and depts. of the UW. Audition Sign Up Required  |  More Info 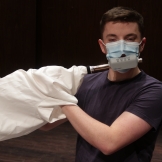 Music Behind the Masks

Students and faculty at the School of Music performed and studied music in Autumn 2020 with some dramatic modifications to format and staging. With nearly all classes held online, music students worked and studied from around the globe but also in some specialized settings on the University of Washington campus. 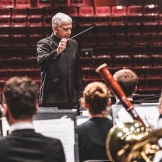