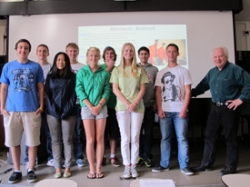 A group of incoming UW freshmen got an early start on their University of Washington studies this past summer in a course developed by Percussion Studies chair Tom Collier.

The course, titled "Close to the Edge: A Survey of Important 20th Century Music Outside of the Mainstream from Abe to Zappa," was one of about twenty early-entry classes for freshmen offered through the UW's Discovery Seminar program.

The aim of the course, Collier says, was to open students' ears to new music and give them lifelong-learning techniques for critical listening and music appreciation. "The 20th Century produced an amazing number of important composers, musicians and bands whose music explored the outer bounds of traditional mainstream genres," he says. "Some of these musical pioneers--including LaMonte Young, Terry Riley, Conlan Nancarrow, Edgar Verese, Cecil Taylor, and Albert Ayler--remain somewhat obscure to most audiences. Other artists, such as Thelonious Monk, Phillip Glass, The Beatles, Frank Zappa, or John Coltrane, may be more familiar since at least part of their careers probably involved commercial or popular music."

In addition to exposing students to new learning techniques for music appreciation, the course aims to increase students' awareness of innovative creators of music whose artistic output might have been missed by mainstream audiences but who were extremely influential on serious musicians and composers regardless of style. In keeping with the "Discovery" theme, Collier says, the class allowed students to explore music not heard through normal channels while making connections with that music to more popular styles that borrowed concepts from important musical explorers."