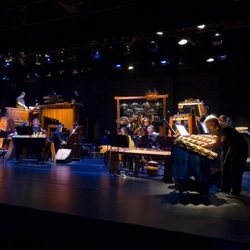 An innovative theorist, inventor, and one of the first 20th century composers to work extensively with microtonal scales, composer Harry Partch (1901-1974) created dozens of incredible instruments for the performance of his musical texts and dance/theatre extravaganzas based on everything from Greek mythology to his own experiences as a hobo.

School of Music faculty, students, and Seattle music-lovers will have a rare opportunity to experience his work as well as his astonishing collection of musical instruments when New Jersey-based Newband, custodians of the Harry Partch Instrument Collection, presents a concert at Meany Theater on Nov. 7 as part of a three-day residency at the School of Music.

Founded in 1977 by Dean Drummond (who studied and performed with Partch, notably on his 1960s Columbia record label recordings) and flutist Stefani Starin, who continue as Artistic Directors, Newband is Artist Ensemble in Residence at Montclair State University. A typical performance by the group involves a stage filled with some of the world's most amazing musical instruments and an ensemble of virtuosos who move from instrument to instrument with incredible ease.

The Nov. 7 concert will feature performances of three masterworks by Partch—Castor and Pollux, Eleven Intrusions, and Barstow—and pieces by Newband co-director Dean Drummond and by Mathew Rosenblum.  In addition to their public performance, the ensemble's residency activities will include sessions with UW student composers and an educational performance for Seattle-area schoolchildren arranged in partnership with the Meany World Series.

Details and ticket information for the Nov. 7 performance are available here.

View photos of the group and the instruments from their Nov. 7 rehearsal at Meany Hall here.