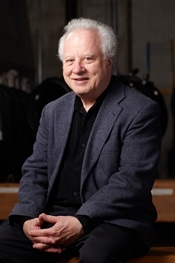 A slight nod from the Grammy Academy, a guest conducting gig in St. Petersburg, Russia, and new professorship and board appointments are among the news from School of Music faculty for Fall Quarter 2012.

Percussion Studies Chair Tom Collier has received his first-ever nod from the National Academy of Recording Arts & Sciences (NARAS, the Grammy Academy) with the inclusion of his 2012 Origin Records release "Tom Collier Plays Haydn, Mozart, Telemann and Others" on the first-round ballot for a 2012 Grammy Award in the category of Best Classical Instrumental Solo. His recording is among nearly 300 selections that will be narrowed down to the final five nominees for the category.

"While anyone can submit their recording to NARAS, a panel selects those recordings deemed worthy of consideration for inclusion on the first-round ballot," Collier says. "This is the first time one of my albums was deemed worthy enough. Before making too much of this, you should know that there are around 300 recordings that were selected to appear on the ballot under this category, so my chances of even getting a single vote are not great. I'm mystified as to why this album (my least favorite - I only recorded it to quiet some critics who didn't believe that I could actually perform classical music) was chosen over some of my past recordings which were more reflective of what I actually do."

The five nominees in the category will be announced in early 2013.

Jonathan Pasternack, director of orchestral activities at the UW, paid a visit to Russia in early October to conduct the Saint Petersburg Chamber Philharmonic. The sold-out concert in Glinka Hall, entitled “Elegies of Love and Death,” featured performances of Ives' Hymn for Strings, Haydn's 'Trauer' Symphony, and Shostakovich's Symphony No. 14; the Shostakovich received its premiere performance in the same concert hall in 1969.

As part of his visit, Pasternack was a featured guest on prominent national programs in Russian radio and television. Founded in 2002 to create and encourage cultural exchange between the United States and Russia, the St. Petersburg Chamber Philharmonic has since become one of St. Petersburg’s most innovative chamber orchestras.

Music Education professor Steven M. Demorest and Music History professor Larry Starr have been named the UW’s Ruth Sutton Waters Endowed Professors of Music. The professorship is a three-year award that provides support for the professors’ research and teaching activities.

In addition to his research in the psychology and neuroscience of music, Professor Demorest is responsible for reviving the UW Men’s Glee Club, one of the oldest choral organizations on campus. He and Professor Steven Morrison also co-direct the recently inaugurated Laboratory for Music Cognition, Culture, and Learning at the School of Music. Along with his many publications in academic journals, Professor Demorest is also the author of Building Choral Excellence: Teaching Sight-singing in the Choral Rehearsal, published by Oxford University Press, and is the editor of a series of lectures by Weston Noble, Creating the Special World, published by GIA.

Professor Starr is a nationally recognized author and authority on the music of George Gershwin and American popular music. In the past several years he has published two books to wide acclaim, including George Gershwin (2011, Yale University Press), which was a Choice Outstanding Academic Title for 2011 in the Music category, and Rock: Music, Culture, and Business (2012, Oxford University Press), which he co-authored with Joseph Schloss (MA '95 Ethnomusicology) and former UW associate professor Christopher Waterman.

This academic year, Professor Starr, who serves as chair of the Music History department, is organizing A Festival of Ives, a three-day festival (May 6-8, 2013) bringing together students, faculty, and guest artists and scholars to explore the music of iconic American composer Charles Ives.

Heneghan elected to executive board of Society for Music Theory

Music Theory assistant professor Áine Heneghan was elected to a three-year term as Member-at-Large of the Society for Music Theory's executive board at the Society's annual meeting in New Orleans in early November.  Established in 1977 to promote music theory as both a scholarly and a pedagogical discipline, the Society's membership includes more than 1,200 individuals and nearly 400 institutions.

Along with other resources and activities of interest to music theorists, the Society disperses numerous grants and awards recognizing outstanding publications within the field of music theory, supporting the preparation of scholarly publications, and enabling travel to conferences for qualifying theorists.

Prior to her appointment to the Society's executive board, Heneghan served the Society as a member of its Committee for the Status of Woman and, as a student representative, its Professional Development Committee.