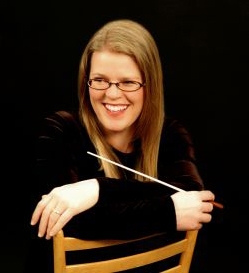 Collaborations, presentations, publications, music in the trees and the bright lights of Broadway all play starring roles in the School of Music's student and alumni updates for Fall Quarter 2012.

Doctoral Composition student Abby Aresty gained national attention this fall for her unusual dissertation project, "Paths II: The Music of Trees," a sound installation at five different locations at the Washington Park Arboretum. Aresty recorded sounds (running water, wind, rustling leaves, etc.) at each site then assembled the recordings into compositions that were broadcast via solar-powered stereo equipment hidden in the trees at each of the five sites.

She enlisted the help of Chris Watson, the Arboretum's arborist, who hauled more than a half ton of cable, speakers, and sound gear into the trees, in some cases more than 100 feet off the ground. The installation was in place throughout the month of October. In writing about the project on her blog, Aresty noted the differences between composing for a seated audience and composing for an outdoor environment:

Concert music comes with certain expectations: you assume your audience will be there from start to finish and that people will sit in one spot throughout. There will be minimal distractions, and, aside from the piece, the space will be quiet. In this setting, the composer is free to structure time in any way they please, and it is altered only by the different interpretations of performers.

Writing for an outdoor sound art installation is completely different. Visitors may not arrive at the ‘beginning’ of a piece, and they may not stay until the end. Some will hear the piece twice as they move around and explore the site while others will sit still to listen. And the space is anything but quiet–at any given moment it is alive with a constantly shifting intricate web of sound. In this setting, each visitor structures their own musical time as they explore the location. Their experience is further shaped by the environment and life surrounding them. This setting appeals to me. There are a variety of different paths listeners may take, and ultimately the work is a collaboration–each visitor’s experience is shaped collectively by the artist, the visitor and the space.

More about Aresty's project and a video from the installation is available in this article from the Seattle Times.

Doctoral conducting student Anna Edwards brought together a multi-generational group of musicians from three centers of Seattle’s classical music community for her October 23 doctoral recital at Roosevelt High School. The Seattle Collaborative Orchestra, organized by Edwards and including musicians from Roosevelt High School, the University of Washington, and Seattle Symphony Orchestra (SSO), performed Rachmaninoff's Symphonic Dances and A Mountain Symphony by Sarah Louise Bassingthwaighte to a capacity audience at Roosevelt's performance auditorium.

Edwards' connections to all three music organizations run deep. Her studies at UW bring her into daily contact with many former students from Roosevelt High School, where she has been director of the school's award-winning orchestra for more than a decade. Under her direction, the Roosevelt Orchestra has performed with Seattle Symphony members in several side-by-side concerts, most recently in 2012. A violinist with Auburn Symphony Orchestra, Edwards also has worked for many years with the Seattle Youth Symphony program, conducting the Symphonette Symphony Orchestra for 8 years (1997-2005) and the Festival String Orchestra for the Marrowstone-In-The-City summer music program for students ages 7-15. Read more about Edwards and the Seattle Collaborative Orchestra project in a post by SSO violist Rachel Swerdlow on Seattle Symphony's website.

Paul Hansen (’83 BA/BM Percussion) is on Broadway during the holiday season playing percussion in “A Christmas Story,” running Nov. 7 through Dec. 30 at the Lunt-Fontanne Theater on Broadway and 42nd street. “Paul was my first in a long line of UW percussion and jazz students who have gone on to significant careers in music and teaching,” says his former professor, Tom Collier. Hansen has been first call percussionist for the local 5th Avenue and Paramount Theater shows the past twenty years as well as for dozens of traveling shows out of New York. “It is quite a big deal to get an invitation to  perform on Broadway,” Collier adds, “especially in a town filled with world-class percussionists.”

Six graduate students in the UW's Ethnomusicology program were presenters at the joint conference of the American Musicological Society, the Society for Ethnomusicology, and the Society for Music Theory in New Orleans in early November: Kimberly Cannady: “‘We Had Great Books, but No Music’: Iceland, with and without Music”; Rob Carroll: “Enchanting the State as Religious Congregation: Gaita Music as Popular Prayer in Maracaibo, Venezuela”; Julia Day: “Reimagining the ‘African Success Story’ through Ivorian Coupé-Decalé”;  Maren Haynes: “Heaven, Hell, and Hipsters: Attracting Young Adults to Megachurches through Hybrid Symbols of Religion and Popular Culture in the Pacific Northwest”; James Morford: Stylistic Trends and African Influence in John Coltrane’s Stellar Regions”; and Kim Carter Muñoz: “‘¡Todos somos huastecos! ‘We are all Huastecan!’: Performance of the Democratization of Son Huasteco at El Festival de la Huasteca (The Festival of the Huasteca).”

Sean Williams (’85 M.A. ’90 Ph.D. 1990, Ethnomusicology) sends word of the publication of her two latest books: Bright Star of the West: Joe Heaney, Irish Song-Man (Oxford University Press, 2011) and Focus: Irish Traditional Music (Routledge, 2010). Bright Star of the West (co-written with Irish scholar Lillis Ó Laoire) is a critical analysis of the songs and stories of the late Joe Heaney, who came to the UW Ethnomusicology division first in 1978, then in 1982-94 as a Visiting Artist in the School of Music. Irish Traditional Music is a textbook in the Focus on World Music series with Routledge. Her current writing projects include The Performance of Liminality and the second volume of The Ethnomusicologists’ Cookbook. Sean teaches ethnomusicology, Asian Studies, and Irish Studies at The Evergreen State College in Olympia, WA.