Arts collaborations under way throughout 2012-13 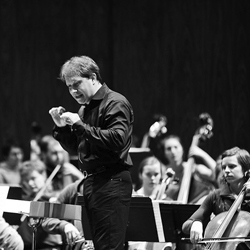 Collaboration with campus and Seattle arts organizations will spotlight the talents of students and faculty during Winter Quarter and beyond when the School of Music participates in the campus-wide celebration of the centennial of Igor Stravinsky's Rite of Spring and welcomes Seattle Symphony Music Director Ludovic Morlot to campus to conduct the University Symphony in his first public appearance as an affiliate professor at the School of Music.

The Rite of Spring celebration kicks off in January with Faculty Dance/Collaborations, a production of the School of Dance that will feature the work of School of Music faculty artists Melia Watras, Dainius Vaicekonis, and Richard Karpen, as well as DXARTS research associate (and School of Music alumnus) Joshua Parmenter. Public performances are Friday and Saturday, January 18 and 19. Ticketing is through the Dance Program, but School of Music Notecards and student and faculty performances passes are valid for admission.

Later in January, the School of Music collaborates with the Meany World Series on its performances by Montreal dance company Compagnie Marie Chouinard. The University Symphony, conducted by Jonathan Pasternack, will perform Stravinsky's Rite of Spring live during these performances, January 24-26 at Meany Theater. Doctoral piano student Brooks Tran is also on the program, performing Chopin's 24 Preludes. Ticketing is by the Meany World Series.

Several lectures by School of Music faculty and students are on the Rite of Spring lecture series hosted by the World Series and the Henry Art Gallery and running through Spring Quarter 2013. Lectures and demonstrations by faculty members Huck Hodge and Cuong Vu and doctoral composition student Abby Aresty are among the series offerings.

Beyond the Rite of Spring collaboration, the School of Music welcomes Seattle Symphony Music Director Ludovic Morlot to campus on Thursday, February 28 for his premiere appearance as a UW affiliate professor of music. Morlot will conduct the University Symphony in a performance of Ravel's Daphnis et Chloé, Suite No. 2. This concert will also feature performances by three UW Concerto Competition winners: Masamitsu Ohtake, Ching-Yueh "Andrew" Chen, and Li-Cheng Hung.

Ticket and program details for the February 28 University Symphony concert are available here.

The University of Washington’s College of Arts and Sciences celebrates the 100th anniversary of the first performance of Igor Stravinsky’s Rite of Spring with a series of lectures and performances in various venues around campus throughout Winter and Spring Quarters.

Performances of The Rite of Spring

Meany Hall will be bursting with talent as UW Dance presents Faculty Dance/Collaborations.

On the program is Stravinsky’s iconic The Rite of Spring, José Limón’s tribute to Isadora Duncan, Dances for Isadora and the premiere of A Small Piece of the Story. Faculty artists from UW Dance, Music, and Drama combine forces and create choreography, perform music, and design costumes for advanced undergraduates, guest artists, and community dancers. School of Music faculty contributors include Melia Watras performing to Jennifer Salk's A Small Piece of the Story,  Dainius Vaicekonis performing on José Limón’s tribute to Isadora Duncan, and School of Music director Richard Karpen and alumnus Joshua Parmenter programming the Disklavier piano performances of the Rite of Spring.

Pre-show lecture each night will be given by dancer/choreographer and former company member,  Louis Gervais, 7:10-7:30PM

Montreal artist Marie Chouinard has been a notable presence on world stages for more than two decades. The presentation of Compagnie Marie Choiunard features a partnership with the UW School of Music. In celebration of the 100th anniversary of Stravinsky’s Rite of Spring, the company will perform Le Sacre du Printemps with the UW Symphony Orchestra. The program also includes 24 Preludes set to the music of Chopin performed live by pianist Brooks Tran, a UW School of Music doctoral student. (Recommended for mature audiences. This performance contains partial nudity.)

Insightful and energetic Jon “Jackie” Kimura Parker is one of today’s most sought-after pianists. His incredible showmanship, coupled with a fine-tuned attention to detail, is a signature of his illustrious performing career. Parker’s Meany Hall program includes his own exciting transcription of Stravinsky’s Rite of Spring.

The Rite Centennial Lecture Series will explore how the premiere of Stravinsky’s Rite of Spring had a lasting impact on Western culture and aesthetics, from the original Nijinsky choreography performed by Ballets Russes, and subsequent reconstructions and re-imaginations of this ballet, to today’s composers and their own revolutionary visions for the future of music. All lectures and demonstrations at the Henry Art Gallery will be presented by UW Dance and Music faculty and graduate student members, in partnership with the UW World Series. Related lectures by dance scholars will take place in the UW Dance program and prior to selected performances at Meany Hall. All lectures are free and open to the public and will last about 90 minutes each. For more information about the Rite of Spring Centennial Celebration and related events and performances, visit Arts UW online: www.artsuw.org

The Rite Centennial Lecture Series: The Reconstruction of Nijinsky’s Rite of Spring

Watch a screening of a one-hour PBS documentary The Search for Nijinsky's Rite of Spring on the historical significance of The Rite of Spring and subsequent reconstruction by the Joffrey Ballet in 1987, followed by a Q&A with the directors of the UW School of Music and Dance Program.

Dance Research Symposium Lecture by Martha Carter from Marie Chouinard offered in partnership with UW Dance Program—in this lecture, scholar and innovator Martha Carter shares her research and practice and talks about the process of recreation of The Rite of Spring by Marie Chouinard.

Henry Art Gallery auditorium (FREE)
The Rite Centennial Lecture Series: The Rite, Then and Now
Faculty members Jürg Koch and Betsy Cooper from UW Dance Program discuss The Rite of Spring over the years and share film clips of influential versions of “ Rite.”  Jürg shares his experience choreographing his own version of The Rite of Spring for the UW faculty dance concert, premiering on January 18 at Meany Hall for the Performing Arts.

The Rite Centennial Lecture Series: Music of Today with Huck Hodge
In this lecture/performance, UW School of Music professor Huck Hodge will demonstrate his unorthodox approach to sonic art through the use of sound-making toys and the repurposing of acoustic instruments. It will also demonstrate how seemingly unmusical noises (satellite chatter, ambulance sirens, cell phone radiation, short-wave radio transmissions, etc.) can be transformed into tapestries of immense sonic beauty.

Henry Art Gallery auditorium (FREE)
The Rite Centennial Lecture Series: Music of Today with Abby Aresty
In this lecture, Abby Aresty, a UW School of Music Graduate student, shares her most recent work in which she investigates the role of breath in music through creative manipulations of a performer’s relationship to her own breath.

Henry Art Gallery auditorium (FREE)
The Rite Centennial Lecture Series: Music of Today with Cuong Vu
Cuong Vu and his guest(s) will perform and discuss the avant-garde, free improvisation, and experimentation/innovation he uses to create his forward-looking music.