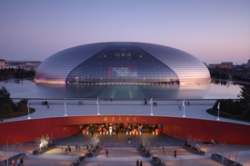 Fifty-six members of the UW Wind Ensemble will spend spring break 2013 in Beijing performing at the China Conservatory of Music and various other concert venues. The group’s visit, funded in part by the Chinese government, is intended to enhance cultural exchange activities between the United States and China through shared musical endeavors and exchange of scholars.

While in Beijing, the UW Wind Ensemble is scheduled to perform in a shared 'side-by-side' concert with the China Conservatory Wind Ensemble and will also present concerts at other major venues in Beijing. A chamber music recital with alternating performances by students from both institutions is also on the itinerary.  On March 31, the group will perform at the National Center for the Performing Arts (NCPA) in Tiananmen Square.

“The NCPA committee was apparently quite impressed by the application and the presentation given by Zhao-Rong Chen, professor of flute at the China Conservatory and alumni of the UWSOM ('09 DMA Flute Performance),” says Timothy Salzman, conductor of the Wind Ensemble. “The National Center is the most amazing concert complex I've ever seen in my life,” he adds. Professor Salzman conducted the Beijing Wind Orchestra, a professional wind ensemble, in a concert at the NCPA in April 2011.

Wednes­day, March 27: Con­cert at the China Conservatory of Music

Sun­day: March 31: Con­cert at the National Center for the Performing Arts

For detailed information about the tour and ways to support student musicians at the School of Music, visit the China Tour website.