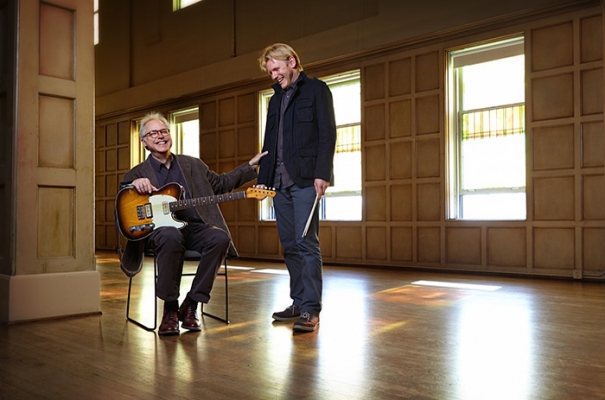 The School of Music celebrates the appointments of guitarist Bill Frisell and drummer Ted Poor to the Jazz Studies faculty with a series of concerts in early November on the UW campus co-presented by Earshot Jazz and the 2013 Earshot Jazz Festival.

Starting off a string of three UW concerts, Frisell performs in two distinct trios over two nights of performance at the UW’s Jones Playhouse. On Friday, Nov. 1 he teams up with UW Jazz faculty Cuong Vu on trumpet and Seattle musician Robin Holcomb on piano, and on Sunday Nov. 3 with UW jazz faculty members Luke Bergman, bass, and Ted Poor, drums.

On Sunday, Nov. 10, Frisell moves over to the Meany mainstage for an evening with his Big Sur Quintet—Hank Roberts, Jenny Scheinman, Eyvind Kang, and Rudy Royston—featuring an opening set by Frisell and violist Eyvind Kang, with live artwork projections by Seattle cartoonist Jim Woodring.

The UW School of Music and Earshot Jazz present renowned guitarist Bill Frisell in an evening of duo and trio performances with trumpeter Cuong Vu and pianist Robin Holcomb in this Earshot Jazz Festival event celebrating Frisell’s appointment as affiliate professor of music in the UW Jazz Studies program.

After Eyvind Kang and one-of-a-kind cartoonist Jim Woodring join him in an opening performance, Bill Frisell presents his Big Sur Quintet, fresh from a CD release and as riveting a band as any working today. Playing Frisell’s entrancing compositions, the group evokes the singular spacious beauty of the Southern California coastline. Joining the guitarist are Jenny Scheinman on violin, Seattle-based Eyvind Kang on viola, Hank Roberts on cello, and Rudy Royston on drums.

The Jazz Studies Program at the University of Washington takes giant steps forward with the appointments of internationally renowned guitarist Bill Frisell and drummer Ted Poor to the School of Music faculty.

The appointments usher in the next phase of one of the School of Music’s flagship programs, which has embraced an increasingly forward-thinking approach since the 2007 arrival of trumpeter and associate professor Cuong Vu, who was appointed chair of the program in 2012.

"The University of Washington School of Music has been a driving force for advancing jazz in the Pacific Northwest for many years,” School of Music Director Richard Karpen said recently. “In 2010 the undergraduate program celebrated its 20th anniversary, and this year the School of Music welcomed its first master's degree students in Jazz Studies. With Cuong Vu's vision and dynamic leadership and the addition of Bill Frisell and Ted Poor to the School's faculty, the UW is now poised to become one of the elite centers of jazz education and innovation nationally."

Frisell’s appointment as affiliate professor of music formalizes a longtime association with the school that has included a number of clinics, workshops and performances with School of Music students and faculty over the past several years.  Most recently, he headlined the UW’s student-run Improvised Music Project Festival last month and performed with UW students, Vu, and Poor during a clinic at the School of Music and a concert at the Chapel Performance Space in Wallingford.

Frisell deferred to Vu when asked during the UW clinic last month to elaborate on the implications of his appointment to the Jazz Studies program. “I’m waiting for Cuong to tell me what I’ll be doing,” he said. “He’s the boss.” Vu clarified that the guitarist would not be teaching classes or giving private lessons but would be encouraged to consider the School of Music a creative laboratory for musical exploration and to collaborate with students and faculty as his performance schedule allows.

“Along with all of the well-documented qualities and accolades that make Bill Frisell a living musical legend whose playing has contributed to the evolution of the electric guitar, what deeply resonates with me is his gift for making anybody and even anything around him sound amazingly great and unique,” Vu said recently. “This talent also translates into Bill's relationship with everyone that he engages. The students all centrifugally gravitate to him and in doing so, stumble upon a refuge of optimism and reassurance within themselves. He's like an angel sent to help each of us.”

Ted Poor joins the School of Music faculty as a full-time artist in residence. The drummer and long-time Cuong Vu collaborator is relocating to Seattle from New York and will take up teaching duties at the School in Fall Quarter 2013.

A graduate of the Eastman School of Music, Poor is firmly established as a unique and important voice in the New York jazz/improvised music community. Besides his many collaborations with Cuong Vu, he has performed with a broad spectrum of musicians including Kurt Rosenwinkel, Chris Potter, Aaron Parks, Maria Schneider, Scott Colley, George Garzone, Ralph Alessi, Marc Ducret, David Fiuczynski, David Berkman, Nils Wogram, Donny Mccaslin and John McNiel. As a guest soloist and educator, Poor has held residencies at, among others, the Eastman School of Music, Berklee College of Music, Cal Arts, Lawrence University, the HR Big Band of Frankfurt, Colorado University at Denver and the University of Washington.

“I've played with Ted for over ten years and since our very first notes, he has deeply informed the music while propelling it with what seems like limitless intensity and spirit,” Vu says.  “And even through the most grueling of our tours, with each note of each piece of music, day after day, Ted would deliver this same intent. He has demonstrated in his residencies at the UW School of Music that the essence of this ability effectively translates into his teaching. He has been an incredibly galvanizing force for the students even in his brief times here.”

Vu echoed Karpen’s belief that the appointments would have a significant impact on the Jazz Studies program at UW. “They will transform the jazz program in ways far beyond what I can imagine,” he said, “though we can all trust that their impact will be of great depth and their effect powerful and long-lasting.”