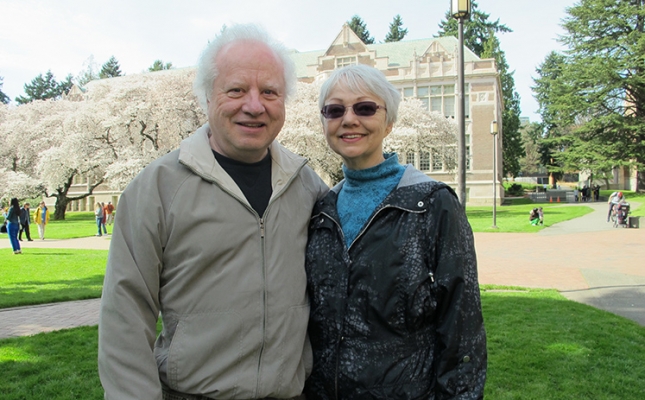 Tom and Cheryl Collier outside of the Music Building, where they met more than forty years ago (Photo: Joanne De Pue)

At the end of his Mallethead series concert last May, longtime School of Music percussion professor Tom Collier returned to the stage alone, but not for a fnal bow. Rather, he asked the audience to bear with him for one more song. “Forty-four years ago today, I married the love of my life, my wife Cheryl,” he said, gesturing to a woman in the center of the second row of Meany Studio Theater. Having absent-mindedly booked a concert for the night of his anniversary, he wanted to observe the milestone—and make it up to his life partner—by performing a well-known 60s era hit by Carole King, arranged for vibraphone.

His musical tribute was perfectly in tune with the occasion, given the constant presence of music in the lives of both parties, from well before their meeting as students at the UW School of Music more than four decades ago. Collier remembers his frst public performance, at age five, on April 2, 1954, playing marimba and tap dancing at the VFW Kiddie Karnival at Puyallup High School, and he remembers that long ago day in the stairwell of the Music Building after orchestra rehearsal when he asked Cheryl out on a date and she said yes.

Two children and two grandchildren later, they are still spotted around the UW campus, hand in hand, enjoying time together in the breaks in the academic year. Cheryl, a flutist who maintains an active performance schedule as principal flute of the Thalia Orchestra and member of various chamber groups, enjoyed a long career as a music teacher in the Federal Way school system. Collier has spent more than thirty years teaching Percussion and Jazz Studies students at the University in addition to his active performance and recording career in the Seattle area and beyond.

Though it may seem that he has spent most of his life at the UW (He notes with some amusement that “Bow Down to Washington” was among the three short pieces he played at his frst performance), Collier did, in fact, work with many leading recording musicians in Los Angeles following his graduation from the UW in 1971—artists such as Barbra Streisand, Frank Zappa, Earl “Fatha” Hines, Harry Nilsson, Della Reese, Peggy Lee, and many more. And he did, in fact, enjoy a notable performance career long before all of that, appearing on the nationally televised Lawrence Welk Show several times as a young tap-dancing marimba player.

His earliest musical ventures were encouraged by his musician parents, Ward and Ethel Collier, a trumpeter and pianist who performed in various lounge bands around Seattle and Tacoma. Collier admits that Ethel was a bit of a stage mom, while his father carefully documented his son’s earliest musical milestones.

“My dad had a direct-to-disc home recorder and he made a lot of 78rpm records of the family during that time, before he bought a tape recorder,” Collier says. He recently unearthed a vinyl recording his father made in January of 1954, featuring the three songs Collier performed his frst time onstage, as well as the audition recording he made when trying out for the Welk Show. With such an early start on establishing his identity as a musician, it’s no surprise to hear that Collier’s classmates at Genesee Hill elementary school in West Seattle called him Tommy Marimba.

Some of those same former classmates might be spotted in the audience when Collier performs on campus and around the Puget Sound region, often with his longtime friend and musical partner, bassist Dan Dean. The two have been friends and musical collaborators since they were teenagers. Dean will be among the musician friends joining Collier onstage throughout 2013-14, most notably on April 2, when guitarist Larry Coryell, percussionist Emil Richards, clarinetist (and emeritus professor) Bill Smith, bassist Dan Dean, and pianist Marc Seales join him for “Sixty Years Behind Bars,” a concert commemorating, to the exact day, the sixtieth anniversary of Collier’s frst public performance. Will “Bow Down to Washington” be on the program?  Collier smiles before delivering an emphatic “No.”  But knowing this musician and his propensity for observing musical milestones, it’s a sure bet that notes from Collier’s life in music—thus far—will figure prominently.