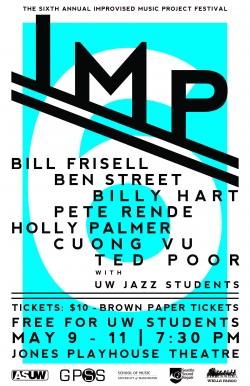 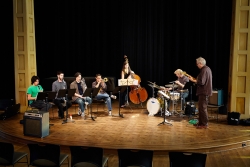 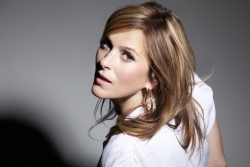 Songwriter Holly Palmer kicks off IMPFest VI with her performance on May 9. 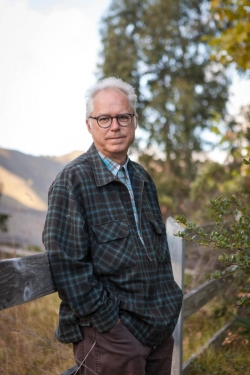 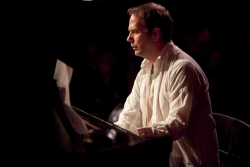 Keyboardist Pete Rende is a featured artist at IMPFest VI. 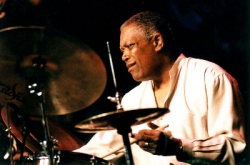 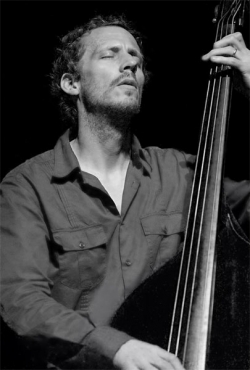 Organized and hosted entirely by the students of the Improvised Music Project (IMP), a registered student organization of the UW, the festival pairs up-and-coming student musicians and UW Jazz faculty with world class guest artists.

Faculty from the Jazz Studies program—including affiliate Professor Bill Frisell--will perform a central role in the festival, with trumpeter Cuong Vu, drummer Ted Poor, and Frisell performing nightly, with a featured guest (or two) each evening of the festival.  Each evening’s concert also includes an opening set of music by the evening’s featured artist, performed by Jazz Studies students.

Admission to the festival is free to UW students and $10 for all others.  The Floyd and Delores Jones Playhouse is on the corner of University Way and NE 4oth Street, at 4045 University Way NE.

with UW Students,
then with Bill Frisell, Cuong Vu and Ted Poor

Sunday, May 11
Billy Hart and Ben Street
with UW Students,
then with Bill Frisell, Cuong Vu and Ted Poor

Bill Frisell
"It's hard to find a more fruitful meditation on American music than in the compositions of guitarist Bill Frisell. Mixing rock and country with jazz and blues, he's found what connects them: improvisation and a sense of play. Unlike other pastichists, who tend to duck passion, Mr. Frisell plays up the pleasure in the music and also takes on another often-avoided subject, tenderness." - The New York Times

This musical kinship with Miles Davis has been cited repeatedly in the music press. The New Yorker notes: "Bill Frisell plays the guitar like Miles Davis played the trumpet: in the hands of such radical thinkers, their instruments simply become different animals. And, like Davis, Frisell loves to have a lot of legroom when he improvises--the space that terrifies others quickens his blood.”

Billy Hart
William “Billy” Hart (born November 29, 1940 in Washington, D.C.) is a jazz drummer and educator who has performed with some of the most important jazz musicians in history.

Early on Hart performed in Washington, D.C. with soul artists such as Otis Redding and Sam and Dave, and then later with Buck Hill and Shirley Horn, and was a sideman with the Montgomery Brothers (1961), Jimmy Smith (1964–1966), and Wes Montgomery (1966–1968). Following Montgomery’s death in 1968, Hart moved to New York, where he recorded with McCoy Tyner, Wayne Shorter, and Joe Zawinul, and played with Eddie Harris, Pharoah Sanders, and Marian McPartland.

At age 72, Billy Hart works steadily and teaches widely. Since the early 1990s Hart spends considerable time at the Oberlin Conservatory of Music, and is adjunct faculty at the New England Conservatory of Music and Western Michigan University. He also conducts private lessons through The New School and New York University. Hart often contributes to the Stokes Forest Music Camp and the Dworp Summer Jazz Clinic in Belgium.

He leads a group with Mark Turner, Ethan Iverson, and Ben Street.

Holly Palmer
Born in Santa Monica, California, Palmer graduated the Berklee College of Music in Boston before moving to New York where she wasted no time in recording her self-titled, debut album (released on Reprise Records, a Warner Bros.-affiliated label). Palmer then spent the next year crisscrossing the US and Europe in its support, touring with such acts as k.d. lang, Shawn Colvin and Paula Cole. The tour's end landed Palmer in London, England where she hooked up with producer Howie B (U2 and Björk) to track her second album, Tender Hooks (given 4 stars by Britain's The Mail on Sunday).

It was at this time in Palmer's career that she was invited by David Bowie to sing on his album Hours. Palmer was featured on the opening track "Thursday's Child". Palmer spent the next year touring the world with Bowie.

Post-Bowie, Holly settled in Los Angeles to begin working on her next solo album, I Confess, this time collaborating with Grammy award-winning Allee Willis. I Confess included a Dr. Dre mix of "Jumping Jack".

Palmer next dueted "Down With Love" with Michael Bublé for the film of the same name (starring Renée Zellweger and Ewan McGregor), and then again hit the road, this time with Gnarls Barkley in support of their Grammy winning, debut album St. Elsewhere.

When Palmer stepped off the Barkley bus, she reconvened with Willis, this time recording material under the alter egos Bubbles & Cheesecake, whose video for the first single "It's A Woman Thang" was featured on YouTube and received over 800,000 views within the first week alone -- and has since gone on to win numerous W3 Awards.

Palmer's fourth solo album, Songs For Tuesday, which she co-produced with Joey Waronker (Beck, R.E.M.), housed "I Will" -- a song featured in the film "Into The Blue" (Jessica Alba). Other notable beneficiaries of Palmer's offerings are the small screen's "Roswell" and "Party Of Five" as well as the big screen's "Forces Of Nature" (Sandra Bullock), "The Women" (Meg Ryan) and "The Express" (Dennis Quaid).

Ted Poor
After graduating from the Eastman School of Music in 2003, drummer Ted Poor moved to New York City, where he has made a deep impression on the jazz and improvised music scene.  Modern Drummer describes his playing as “adventurous, truly dynamic, and forward-thinking.” Jazz Review writes, “Ted has an uncanny ability to shape the music and a refreshingly unique, organic approach to playing the drums.” This unique approach has caught the ears of many of jazz’s most established musicians and quickly placed him amongst those drummers most in demand.

Pete Rende
A graduate from Berklee College of Music, New York-based musician Pete Rende is one of the most creative young piano players in jazz today.

Ben Street
Bassist Ben Street is a member of the jazz groups Orange then Blue on GMRecordings and Sephardic Tinge on Tzadik. His work in avant garde and free jazz during the '90s include performing and recording with Lee Konitz, TimBerne, and in a variety of line ups with drummer Kenny Wolleson. Street has also worked with Joey Calderazzo, Gene Bertoncini, Eugene Maslov, Kurt Rosenwinkel, the Frank Carlberg Quintet and Once Blue.

Cuong Vu
Cuong Vu is widely recognized by jazz critics as a leader of a generation of innovative musicians. A truly unique musical voice, Cuong has lent his trumpet playing to a wide range of artists such as Pat Metheny, Laurie Anderson, and David Bowie.

Improvised Music Project
The Improvised Music Project is a collection of musicians and music fans working to present great improvised music in Seattle and promote its appreciation. The IMP is based in and out of the School of Music at the University of Washington where it is a Registered Student Organization. Our vision is to shape the local music culture by serving as a voice, network and source for live improvised music.

The IMP first appeared in the fall of 2008 when a group of UW’s Jazz Studies students realized the need for greater participation in the local music scene. Since its inception, the IMP has benefitted from outstanding support from the University of Washington, which has helped fund the festivals, rent the performance spaces, and procure some of the incredible artists that are featured yearly. The IMP is also affiliated with the record label Table and Chairs, which was founded by former IMP officers.