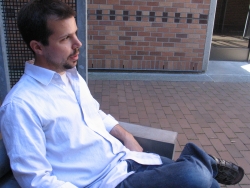 Faculty composer Huck Hodge joins the ranks of such iconic modern composers as Arnold Schönberg, Béla Bartók, and Igor Stravinsky with recognition from the International Society for Contemporary Music (ISCM) League of Composers, which recently declared his work Alêtheia for large ensemble the winning entry in its prestigious annual composition competition.

The award is among numerous honors and commissions awarded to Hodge over the past year. Others include:

A recording of Alêtheia may be heard on a new CD release of works by Hodge.  Life is Endless Like Our Field of Vision, out now on the New World Records label, includes performances by two New-York-based premiere new music ensembles: the Talea Ensemble and the JACK Quartet, among others.  Funding for the recording was through the UW's Royalty Research Fund, supporting research by UW faculty, and through a grant from the Francis Goelet Charitable Lead Trust.

More information about Life is Endless Like Our Field of Vision is available here.