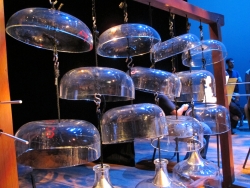 The Cloud Chamber Bowls invented by Harry Partch are included in the collection of instruments in residence at the UW (Photo: Joanne De Pue)
View gallery

The extraordinary collection of handmade instruments invented and built by iconoclastic 20th century American composer Harry Partch completes a cross-country journey from New Jersey to Seattle this week as the Harry Partch Instrument Collection takes up residency at the University of Washington School of Music.

“We are working to make the University of Washington the instruments’ long-term home and integrating the collection into our curriculum and activities,” says School of Music director Richard Karpen, confirming that the instruments are due to arrive in Seattle Nov. 21 and will be housed (for now) in close proximity to the UW’s percussion studios at Meany Hall.

Once settled in Seattle, the instruments will be a resource for students and faculty in the School of Music as well as interested members of the general public, Karpen says. The instruments will be used to teach students to play Partch’s unique microtonal compositions, to commission new works, and to preserve the historical legacy of an important American composer.  Plans for public performances and a summer workshop open to members of the public are still in formulation.

An innovative theorist, inventor, and one of the first 20th century composers to work extensively with microtonal scales, Partch (1901-1974) created dozens of incredible instruments for the performance of his musical texts and dance/theatre extravaganzas based on everything from Greek mythology to his own experiences as a hobo. The instrument collection to be housed at UW includes all of the instruments built by the composer-inventor during the period 1930-1974.

In residence at Montclair State University in New Jersey since 1999, the instruments previously appeared at the UW in 2012 in one of its final appearances under the direction of the late Dean Drummond, a composer and protégée of Partch who died in 2013 from complications from multiple myeloma. Subsequent to his death, a composer and student of Dean’s, Charles Corey, was selected to succeed Drummond as director of the Harry Partch Instrumentarium.

Corey joins the School of Music Composition faculty as a research associate and director of a new Harry Partch Institute. In addition to curating the collection, Corey will facilitate instruction and performance involving the collection.

The UW residency has the blessing of the heir to the Partch estate and current owner of the instruments, Danlee Mitchell, a former student of Partch who from 1958 until Partch's death in 1974, served as the composer’s assistant, ensemble manager, music director, and conductor.  Mitchell, retired music professor and head of percussion studies at San Diego University, expressed his approval of the transition of the collection to Seattle.

“This fortuitous move was expedited by Charles Corey, and consummated by the enlightened vision of Dr. Richard Karpen, Director of the School of Music, UW, and the financial support of the UW,” Mitchell wrote in an email circulated widely in announcement of the residency. “Thanks to these two individuals, and the UW School of Music, for the potential endeavor that this residency will surely bring about.”