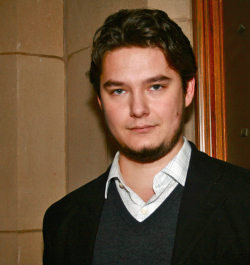 Doctoral composition student Yiğit Kolat is among four finalists for the Toru Takemitsu Composition Award, one of the world's top honors for young composers.

Finnish composer Kaija Saariaho, judge of the competition, chose Kolat's work [difeʁãs] from among 151 entries from 44 countries.  The four nominated scores will be performed in May 2015 at the Tokyo Opera City Concert Hall.

The Takemitsu Award, an annual honor bestowed by the Tokyo Opera City Cultural Foundation, aims to stimulate creative activities in the field of music, following the principles of "Prayer, Hope and Peace" set forth by the opera's late artistic director, Toru Takemitsu. The outcome of each year's competition is determined by a single judge, who uses his or her own judgement to select the winning entries.

"I am impressed by the poetry and unusual formal solution of this piece, both of which are touching and convincing," Saariaho wrote of Kolat's entry. "The piece is a sonic voyage, and the very slow tempo markings escape the usual sense of a measured musical time. This work is deeply original and has quiet, confident intensity."

A Doctoral Candidate at the University of Washington, Kolat studies with Joël-François Durand.