A Gift of Music 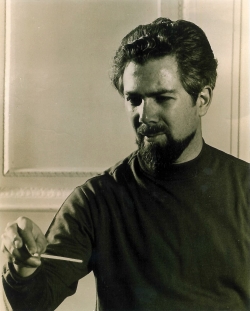 A generous gift of music from the personal collection of the late conductor and writer David Blum includes scores from the likes of Haydn, Bach, Vivaldi, Beethoven, and Tchaikovsky, some with Blum’s handwritten interpretive markings.

Blum had a distinguished career as a conductor on both sides of the Atlantic. His recordings for Vanguard Classics of works by Haydn with the Esterhazy Orchestra have won an international and enduring acclaim.  In its annual New York concert series and on its tours of the United states and Canada, this ensemble brought audiences their first hearing of many neglected masterpieces of Haydn and of the 18th century. Pablo Casals wrote: "The devotion, idealism, and musical taste with which David Blum prepares and performs these masterpieces communicates itself to audiences everywhere."

In later decades, he served as music director and conductor of the Lausanne and Geneva Symphony Orchestras before settling in the Seattle area, where he served as affiliate professor at the School of Music, and did his major writings on musical subjects. His books, which have been translated into several languages, include, Casals and the Art of Interpretation, The Art of Quartet Playing: the Guarneri Quartet in Conversation with David Blum, Paul Tortelier, and Quintet.

The gift, kindly donated by Blum’s family, creates a meaningful tribute to the conductor and provides valuable resources for the school's conducting students.

"This generous gift provides our orchestra library with resources that were thin to date, namely, a number of works by Haydn. David Blum was a Haydn specialist," says David Alexander Rahbee, director of orchestral activities. "It is of special interest for us to note the care with which he prepared his orchestral material, and our students can learn a lot from this. We plan to perform at least one work with some of these materials next season."

The David Blum Collection will be housed in the orchestra library.