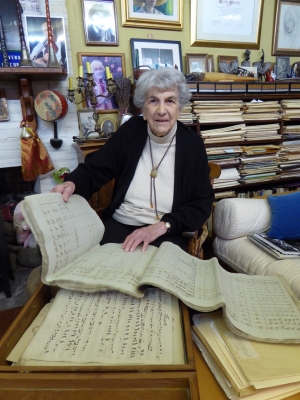 Romance of a Mass

After almost 200 years and more than 5,000 miles, a choral mass written by the great-great grandfather of University of Washington professor emeritus Laila Storch will come to life, perhaps for the first time, as Orcas Choral Society presents Missa Solemn in C by Alois Bohuslav Storch, May 1 at St. Mark’s Cathedral in Seattle and April 23 and 24 at the Orcas Center in Eastsound, Wash.

Storch was Professor of Oboe in the University of Washington School of Music for 30 years and a member of the Soni Ventorum Wind Quintet.

Alois Storch composed the Missa Solemn in 1825 near Prague, and the original hand-penned score has long been in Laila Storch’s care.  Performance of her heritage is “something happening in our later life that’s quite an exciting experience,” she said.

“In the 1940s, when my great-aunt Thekla realized I was serious about music, she gave me this package of thick parchment scores wrapped in newspaper from her attic in Oakland, California,” Storch said.  “Fortunately, it had not been thrown out.”

The package held three masses and a number of waltzes and small pieces, all by Alois Storch.  “He lived near Prague and was a pharmacist, but music was obviously his first love,” Laila Storch said.  “There are notes and marks all over the scores.  The piano pieces are dedicated to a young lady whom he later married, Nina Stain,” she said.

The music got to Thekla’s attic thanks to Alois Storch’s adventuresome son, Jaroslav. He came to America in 1865 and either brought the music with him or had it shipped over later.  Jaroslav settled in San Francisco.  One of his sons, Zdeny, married Thekla.  Another son, Hugo, was Laila’s grandfather.

Laila Storch put the music in a wooden box, and there it stayed.  For decades.

“Our son-in-law, pianist Jon Kimura Parker, read through the piano music, but we never saw any possibility of hearing the mass,” Storch said.  “It has a big orchestra part and a big chorus, and we didn’t have anyone we would dare approach to go through that score and see what it was like.”

Storch’s husband, Martin Friedmann, is a violinist.When he retired from the Seattle Symphony in 2005, he listed restoration of an Alois Storch mass as a to-do project.  Eleven years later, he can scratch that one off.

“Today, there’s software where you can type in music and then read and hear it,” Friedmann said.  “That gave me ideas.”

Friedmann conferred with Adam Stern, conductor of the Seattle Philharmonic. “Adam kindly offered to transcribe the Missa Solemn in C for us. He sent me the music segment by segment, like a TV series,” Friedmann said.  “I felt the music is worth performing.”

“This has all been happening during the last year,” Storch said. “It’s very exciting, seeing something coming to life that’s been around for so long.”

Next, find a chorus

“We’ve known Roger Sherman for years from his Sunday KING-FM radio program, ‘The Organ Loft,’” Storch said.  Sherman conducts the Orcas Choral Society.  “After we had an electronic version of the Missa Solemn in C, we gave it to Roger and asked him if he would be interested in performing it, “ Storch said.

“It’s exciting to hear a piece for the first time and to prepare it for performance for perhaps the first time ever,” Sherman said.  Whether the piece has ever been performed before is something of a mystery.  The only evidence that it has been are a few words penciled in German on the back edge of the score.  Friedmann is still researching the subject.

The concert also will feature the well-known Schubert Mass in G.

And more to come…

What of those other two masses in Laila Storch’s box?  Adam Stern is transcribing them, too.  Word has it that Stern may conduct at least one Storch mass in Seattle in 2017.