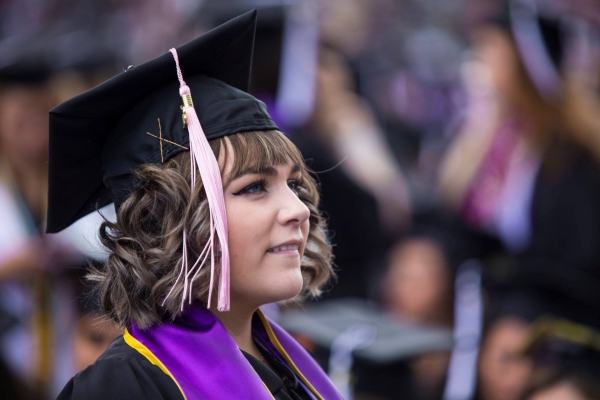 When 5,500 UW graduates entered Husky Stadium for the June 9, 2018 Commencement, student gonfalonieres bore the flags leading each school and college into the stadium. At the head of the processional of graduates from the College of Arts and Sciences was UW Music grad Krissy Terwilliger (’18 BM Vocal Performance), showing not a twinge of nerves under the gaze of 40,000 attendees in the stadium.

Performing in front of massive crowds is a piece of cake for Terwilliger, who graduated from the School of Music this month with a bachelor’s degree in vocal performance. That’s because the soprano from Suffern, New York is a bona-fide UW celebrity, having served the entirety of her University of Washington education as the feature twirler for the Husky Marching Band.

Terwilliger’s dazzling baton work on the fields and courts of Husky sporting events over the past five years has earned her many fans won over by her athleticism and her megawatt personality, which she has deployed to great effect while hyping the crowds and building Husky spirit. Her twirling talents, honed over many years of dedicated practice since she first picked up a baton at the age of four, have also earned her kudos and recognition nationally and internationally.

Last summer, Terwilliger set herself apart from all the other college twirlers in the nation when she took first place in the National Baton Twirling Association’s collegiate national championships, a feat she prepared for while simultaneously completing the rigorous academic and performance requirements of her music degree as well as course work in mechanical engineering.

“This summer when I won, it was this wave of excitement, but also I had achieved something that I had wanted my whole life,” she says in a UW Marketing video focused on her work with the marching band. “I feel like I have so much support from this university in everything I do, and there is no way that I could have won that event if I didn’t have the push from the school and the marching band.”

The championship title, she says, was a great accomplishment personally, but also a win for the UW, which has never before boasted a national twirling champion among its student body. “For everything that I’ve been given at this school, I finally can give something back,” she says. “And I’m forever grateful for that.”

Besides her work as feature twirler, Terwilliger also worked throughout her time at the University as a UW tour guide, sharing her enthusiasm for the university with prospective Huskies and their parents.

At the School of Music, Terwilliger participated in UW opera workshop performances, singing the roles of Despina and Susanna in a presentation of scenes from Mozart’s Cosi fan Tutte and Le Nozze di Figaro and the shepherdess in Ravel’s L’enfant et les Sortilèges. She also sang with the University Chorale and performed as featured soloist with the UW Symphonic Band this past April in the ensemble’s program “Spotlight.”

"It has been exciting to see Krissy bring her championship drive, talent and wonderful humanity to her studies as a singer,” says Cyndia Sieden, Terwilliger's voice teacher at the School of Music. "It has been such a pleasure to mentor and guide her in developing her vocal and theatrical performing skills when she already has so much experience as a seasoned performer. We even got to see her bring her two talents together briefly, juggling oranges in a scene from Cosi!”

Terwilliger’s vocal talents were in the national spotlight this past December in Phoenix when she represented the UW in singing the national anthem when the UW and Penn State faced off at the 2017 Fiesta Bowl.

After a five-year stint at UW jam-packed with outstanding accomplishments, Terwilliger is looking forward to returning to New York and a somewhat more relaxed pace of life—at least for a moment. “I’m going home!” she shared at UW Music’s Grand Finale celebration when asked what the immediate future holds, but she added that her keen interests in science, engineering, and singing will likely lead to graduate studies on the East Coast. And her passion for twirling will lead to more twirling, naturally.

Her advice to future Huskies? “Don’t be afraid to do what you love. You might not know what that is yet but take risks and you will. Even if you don’t go about it the same way as others [do], once you find something you’re passionate about, success will find you.”

Learn more about UW Music graduate Kristina Terwilliger's work as featured twirler for the Husky Marching Band in this video  from UW Marketing.