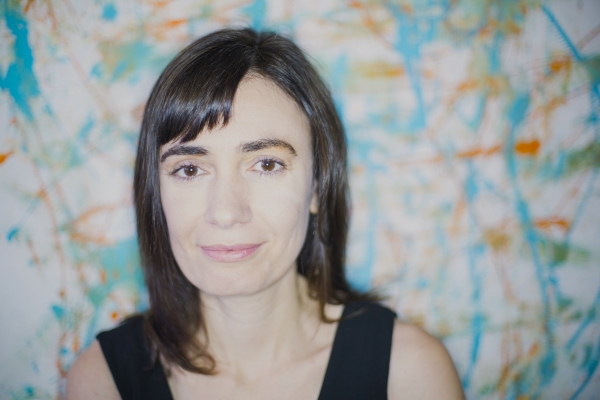 Cristina Valdés has a lot on her plate, this year and every year. The faculty pianist maintains a rigorous teaching and performance schedule that leaves little time for dallying, or even a proper lunch. On a recent afternoon at the Music Building she is heating leftovers for a quick bite before an appointment with one of her UW piano students and reflecting on all that lies ahead, both in the very immediate future and many months from now. She has twenty minutes and a lot of ground to cover, and a lot to prepare for. There is never enough time...

Since joining the UW keyboard faculty in 2014, Valdés has established herself as an important resource for students and faculty interested in composing and performing contemporary music, premiering new works by the School’s composition faculty and leading a UW studio of students interested in exploring extended techniques and the works of modern composers. Over the past several years she also has championed the performance and study of new music through her leadership of the School’s Modern Music Ensemble, a mixture of graduate and undergraduate students who perform challenging repertoire from the 20th and 21st centuries. The group’s performances this season include a presentation of Schoenberg’s Pierrot Lunaire (March 7) and collaborations with the UW Composition Studio (April 16) and Percussion Ensemble (May 23).

Besides her work with students, Valdés anticipates several major UW Music concert season performances in 2018-19: a solo piano recital at Meany Hall on Oct. 26; an appearance on the  March 15th concert by Seattle Symphony and UW Faculty, when she performs Thomas Larcher’s Bose Zellen for prepared piano and orchestra under the baton of Ludovic Morlot; and a May 1 performance on the Music of Today series with faculty percussionist Bonnie Whiting, with the duo performing Karlheinz Stockhausen’s electronic tape work Kontakte, as well as music by faculty composers Joël-François Durand and Huck Hodge. Stockhausen also figures into Valdés’ October solo recital, when she performs the composer’s Klavierstuck IX as well as Bartok’s piano sonata and works by Satie and Boulez.

And all of that is not even to mention the many outside gigs and appearances on the calendar in the months ahead. This pace of life is not uncommon for the professional musician balancing performing, teaching, and family obligations. Valdés tends to take that up a notch by tackling extra-difficult pieces requiring intense preparation in a short window of time. She has been accepting such challenges since not long after she entered the New England Conservatory at age 16, an experience some might find intimidating, but that didn’t really faze her. Not really at all.

“I had so many older sisters growing up,” she says. “The sister I was closest with was a full seven years older than me—so I was that kid feeling really comfortable around older people. I was four years old in first grade, so I was used to that age difference from a really young age.”

Growing up within radio range of New York City, with five older sisters and both parents interested in music, her exposure to a broad range of music began early.

“I liked all kinds of pop stuff,” she says. “My dad liked classical music. He always had the radio in the car tuned to WQXR and he had classical music records. From my sisters I heard everything from Latin music, to punk rock, to disco. One sister might be listening to the Dead Kennedys and another to Led Zeppelin and another to Donna Summer. Then there’s my mom listening to salsa down in the basement. I think this is why I connected with Ives, who is all about the mish-mash. That was my upbringing.”

Her connection with the music of Charles Ives was not immediate. When she entered NEC, her tastes in music were wide-ranging but did not necessarily tend toward the experimental. “I was all about Chopin,” she said. “Everything began and ended with Chopin.” She had heard some pieces by Ives as a student at Elizabeth High School in Elizabeth, New Jersey, but wasn’t initially impressed. “The first time I heard Ives as a high school student, I thought it was complete cacophony,” she says. “I was not a fan at all.”

But at NEC she made new connections and whole new musical worlds opened up to her. “Living in the dorms in freshman year, for whatever reason, the people I connected with were composers and jazz musicians,” she recalls. The jazz musicians introduced her to John Coltrane and Weather Report, “but that was also where I heard Xenaxis, Stockhausen, Boulez, and Ives. And by then, my brain was ready to absorb it.” Her discovery of a particular recording of a work by Ives proved to be an important turning point.

“Hearing Gilbert Kalish’s recording of Ives’ Concord Sonata was a defining moment in my life. I was able to connect with the solo piano piece in a way that I had not with say, Ives’ “Three Places in New England,” which is more about the cacophony. Kalish’s recording so inspired her that she devised a plan to study with him, which led her to Stony Brook University and masters and doctoral studies in piano performance with Kalish.

Flash forward two decades and she is an ultra-busy performer, teacher, and mom, the pianist area arts organizations turn to (often with little lead time) when they’re programming adventurous composers, married to the jazz trumpeter (and UW professor) Cuong Vu, and mom to seven-year-old Vina, a budding dancer/artist/cellist/pianist who, like her mother, feels comfortable around older people. Her schedule is so full that between performing, practicing, teaching, and parenting, there are days, she says, where she has to decide: Shower or practice? So which does she choose?

“Always practice,” she says decisively. “Do you know that today (a Thursday) was the first time I had left the house since I got home on Sunday? Other than opening the door to check the mail, notice, ‘Oh, it’s a beautiful day out there,’ and see that my fuchsias are dying, I pretty much have been chained to the piano.”

The night before she had been up until 2 a.m. practicing for several upcoming performances: an appearance Oct. 12 on Seattle Symphony’s [untitled] series performing a 60-minute piece by Danish composer Hans Abrahamsen, Schnee “Snow,” for which she had just recently received the score; her own UW faculty recital on Oct. 26 at Meany Hall; and a pair of early November performances in Mexico City—including (on consecutive nights) a solo piano recital and an appearance with Orquesta de Cámara de Bellas Artes, performing the world premiere of a new concerto by Carlos Sanchez-Gutierrez as well as challenging repertoire by School of Music composer Richard Karpen.

“There is a ton of great stuff that I’ve been asked to do,” she says, but accepting those opportunities requires juggling, and pieces sometimes placed on the back burner momentarily to allow her to focus on the next most pressing obligation. At the moment she is keenly aware of the need to spend time with her UW recital repertoire. “Boulez and Stockhausen are screaming at me.”

Does she ever just say no to performance opportunities? After all, there are only so many hours in a day. “Sometimes I say no,” she says, “but I always leave space in my schedule for things that come up at the last minute,” such as the [untitled] concert on Oct. 12. When forced to say no, she tries to recommend a colleague who might appreciate or benefit from the opportunity to perform the repertoire.

Recently, she has been invited to perform a solo set on a marathon concert commemorating the opening of the new Octave 9 space at Benaroya Hall, as well as Yannis Kyriakides’ “karaoke etudes” with the Seattle Chamber Players. The music is difficult, the preparation window nearly impossible. Does she say no?

“I feel like I can’t say no, because it’s something I’ve done before, it’s crazy hard, and I like the piece,” she says. But with multiple pieces to prepare, not to mention that May 1 duo performance with colleague Bonnie Whiting, “You can kiss spring break goodbye. Completely.”

She’ll start working with Whiting to prepare Kontakte, she says, at some point further into the school year. “In an ideal world, we’d be preparing already because it’s a piece that could use that time and focus. But both of us have other things going on.” So they’ll shoot for two weeks to a month of intensive rehearsal in a dedicated performance space, followed by a long rehearsal in the performance hall the day before the concert.

“This is a piece that would really be best to learn for the first time as a student,” she says, “because they have all the time in the world.” Told that students might beg to differ, she answers, “They won’t understand what they have—like I didn’t understand what I had—until they’re married and have a kid and a job” on top of their rehearsal and performance obligations.

Not that she’s complaining. Perpetually busy, juggling teaching, performance, and parenting obligations, with not enough sleep and not nearly enough time to do it all, she is ever aware that she is living the life she has envisioned for herself since she was a teenager.

“I wanted this,” she says as she hurries off to meet with her student. “I wanted to be the one who would get the call” to play challenging new repertoire. Wanted the artistic opportunities, family, and piano studio. “It’s a good life,” she acknowledges, heading up the stairs to her studio. “I just need each day to have like 27 hours, and then I’ll be good.”