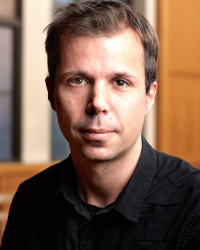 School of Music Composition professor Huck Hodge recently received a significant commission from the Serge Koussevitzky Music Foundation in the Library of Congress, one of the most important commissions available to composers internationally.

Named for the Russian-born composer and long-time former conductor of the Boston Symphony Orchestra, the foundation has supported most of the leading composers of the 20th/21st centuries, including Bartok, Copland, Messiaen, Saariaho, Schoenberg, Stockhausen, Xenakis, and many others.  Hodge's commission, a collaboration with his UW colleagues and alumni, will support his creation of a percussion concerto for UW faculty percussionist Bonnie Whiting and the Seattle Modern Orchestra (led by UW Music alumni Julia Tai and Jérémy Jolley).

The Aaron Copland Residency Awards, based at Copland House in Cortlandt Manor, New York, are inspired by Copland's legacy of support for his fellow composers. Copland House’s support for composers includes all-expenses-paid residencies; post-residency awards, and performances that further advance their work; fiscal sponsorships; and composer commissions. The awards are typically extended annually to six to nine emerging or mid-career American composers, who are invited to reside, one at a time, at Rock Hill, Aaron Copland’s longtime New York home. As guests of Copland House for three to eight weeks, their meals, transportation, housekeeping and other needs are provided for, freeing composers to focus on their creative work.

Hodge is further freed to focus on creative work as the current recipient of the Charles Ives Living Award, the largest monetary award granted exclusively to American composers. The prize, granted by the American Academy of Arts and Letters, supports a two-year composing sabbatical with a generous cash award, and Hodge is currently on leave from the UW through June 2020, the duration of his award term.