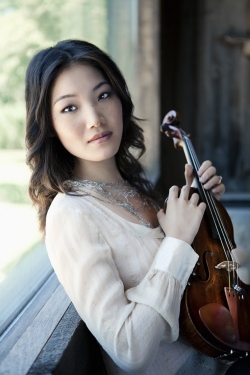 The University of Washington School of Music announces the appointment of celebrated Korean-American violinist Rachel Lee Priday to the faculty as Assistant Professor of Violin in the UW Strings Program, effective in the 2019-2020 school year.

“We are excited to welcome Rachel Priday to the School of Music,” says Director Richard Karpen. “She rose to the top of a strong field of candidates we considered for this position, and we know that she will be a brilliant addition to our already-fantastic strings faculty.”

The Chicago native launches her first year at the University of Washington with a string of solo and collaborative performances at the UW, delivering two solo recitals (Oct. 24 and May 19) and joining with her faculty colleagues, students, and guest pianists in additional presentations throughout the 2019-20 season.

She has earned glowing reviews from critics since making her orchestral debut at the Aspen Music Festival at age nine and has since performed in the world’s most distinguished concert venues as a soloist, collaborator, and cultural exchange ambassador. Acclaimed for her beauty of tone, riveting stage presence, and “irresistible panache” (Chicago Tribune), Priday has appeared as soloist with major international orchestras, including the Chicago, St. Louis, Houston, Seattle, and National Symphony Orchestras, the Boston Pops, and the Berlin Staatskapelle.

A former student of violinists Itzhak Perlman, Robert Mann, Miriam Fried, and iconic strings pedagogue Dorothy DeLay, Priday holds a B.A. in English from Harvard University and an M.M. from the New England Conservatory, where she earned a joint dual degree.

“I am delighted to join the incredible faculty at the UW School of Music this fall,” Priday says. "I look forward to working together with my colleagues and students, contributing to a community that is equally dedicated to the pursuit of artistic excellence and the forward-thinking spirit of discovery.”

Committed to new music, and making enriching community and global connections, Priday takes a multidisciplinary approach to performing that lends itself to collaborative, experimental performances and new commissions. Recent seasons have seen a new Violin Sonata commissioned from Pulitzer Prize Finalist Christopher Cerrone and the premiere of Matthew Aucoin’s “The Orphic Moment” in an innovative staging that mixed poetry, drama, visuals, and music.

In addition to leading a performance studio of violin students, Priday’s activities at the UW are to include faculty collaborations and solo and ensemble performances. She has a full schedule of appearances already lined up for the coming academic year. She makes her UW performance debut on October 24 at Meany’s Gerlich Theater, performing works by Bernstein, Bartók, Salonen, Stravinsky, and Franck with pianist Julio Elizalde, and appears alongside faculty colleagues Mary Lynch (oboe), Seth Krimsky (bassoon), and Sæunn Thorsteinsdóttir (cello) on Dec. 6 to perform Haydn’s Sinfonia Concertante, Op. 84, Hob.1:105 in B-flat Major with the UW Symphony. Just three days later, she joins with faculty colleagues Craig Sheppard, piano, and Sæunn Thorsteinsdóttir, cello, in the worldwide celebration of the 250th anniversary of the birth of Beethoven, presenting the first of two performances (Dec. 9 and Feb. 29) of the composer’s complete cycle of piano trios. And on May 19, she and pianist Timo Andres perform a collaborative concert of works by Stravinsky, Wolfe, Andres, Holcomb, and Copland.