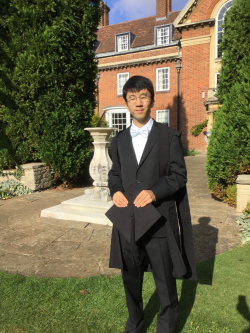 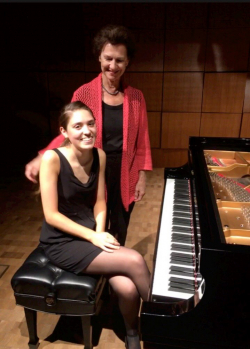 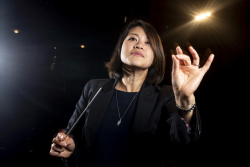 The Department of Special Collections of Stanford Libraries has appointed Music History alumnus Ben L. Albritton (PhD Music History) as its Rare Book Curator.  He began his new assignment this past June. Stanford Libraries rare book collection is extensive with an estimated size in excess of 265,000 titles. Albritton joins the Special Collections program at a time of renewed interest in the history of printing and the history of the book and at a time when new technologies can allow for access to collections that Stanford would otherwise never be able to acquire.

Taro Kobayashi (’14 BM Music; BS Physics), former guitar student of Michael Partington who also performed in the UW’s Collegium Musicum and other early music ensembles around Seattle and studied with Music History Professor JoAnn Taricani, has been accepted into the doctoral program in musicology at Oxford University. His studies will be supported by the university's prestigious funding, the Clarendon Scholarship, covering both tuition and living expenses for the three-year program and awarded to graduate students who demonstrate outstanding academic merit and potential. Kobayashi begins his program in January 2020. He previously received a master's degree with distinction from Oxford University in 2017, with a thesis on sacred songs by the 17th-century Italian composer Sabbatini.

Paula Horner Harper ('12 MA Music History),  former student of JoAnn Taricani, graduated with a Ph.D. in musicology from Columbia University in May 2019 and has been awarded a post-doctoral appointment to teach at Washington University.

Alumna Julia Tai (’10 DMA Orchestral Conducting) is one of five finalists to become the next director of the Missoula Symphony. She led the orchestra in two concerts in late September as part of the orchestra’s “Pass the Baton” series featuring concerts conducted by the finalists.

Trevor Ainge (’19 BM, Vocal Performance; BS, Communications Disorders) attended the Summer Vocology Institute at the National Center for Voice and Speech hosted by the University of Utah in Salt Lake City. The graduate-level coursework consists of three academically accelerated blocks: acoustics and biomechanics; assessment and treatment of voice disorders; and working with the professional performing voice in the clinic and voice studio. “Not only did I learn incredibly valuable material, I met friends and colleagues from the U.S. and abroad- from as far as Ireland, Australia and Mongolia,” he reports. “It was rewarding to be in a room with the next generation of top voice professionals, including opera and contemporary commercial singers, speech language pathologists, and otolaryngologists.”

Darrell Jordan (DMA candidate, Voice) sang the role of Falstaff in Verdi’s Falstaff for Lawrence Opera Theatre this past summer and has leading roles booked in 2020 for both OperaBend in Oregon and Tacoma Opera.

Voice alumna Erika Meyer (’19 Vocal Performance) attended the Wintergreen Music Festival in Virginia this past July as a composition student, specifically a part of the Composer's Retreat taught by Gilda Lyons and Daron Hagen. “We showcased two premieres at the festival: first a collective corpse project (split between the 12 of us) in scoring a short movie, played live by the festival musicians,” she reports. “Secondly, we premiered our string quartets, played by the string student musicians of the festival.” In August Meyer took part in the Lawrence Theatre Opera summer program and performed in a variety of concerts, including the festival’s main event, Falstaff.

Music Ed master’s student Christopher Benfield also attended the Lawrence Opera Theatre summer program in Lawrence, Kansas and took part in several performances. He sang the role of Harlekin in a scene from Strauss’ Ariadne auf Naxos and the Barker in a scene from Amy Beach’s Cabildo. He also was the cover for Bardolfo in the program’s production of Verdi’s Falstaff.

Music Education PhD candidates Juliana Cantarelli Vita, Skuli Gestsson, and Chris Mena present the results of their research at the national meeting of the Society for Ethnomusicology at Indiana University in November. Cantarelli Vita’s two presentations concern the maracatu community of northeastern Brazil and children’s work with archived recordings in an American public-school music classroom. Gestsson and Mena offer their insights on the collective songwriting project at the Yakama Nation Tribal School in the long-running program, Music Alive! in the Yakima Valley.

Shayna Stahl (’19 DMA Wind Conducting) has been awarded the 2018-19 American Prize in Conducting—band/wind ensemble (community division) for her work with the University of Washington Concert Band. Stahl, recently appointed Associate Director of Bands and Director of Athletic Bands at the University of North Carolina at Charlotte, studied with UW Bands director Timothy Salzman during her years at the UW, assisting with the Wind Ensemble and working with the Concert and Campus bands. At North Carolina, Stahl serves as the Director of the “Pride of Niner Nation” Marching Band and the 49ers Basketball Band. She also serves as the conductor of the Symphonic Band and teaches a course in marching band techniques. Additionally, Dr. Stahl serves as the conductor for the Charlotte Youth Symphonic Band of the Charlotte Youth Wind Ensembles (CYWE).

Wind conducting alumnus Mitchell Lutch (’08 DMA, Wind Conducting), has been accepted to present a session on his new book, In Search of Meaning: Frank L. Battisti, The Conservatoy Years and into the New Millennium, at the February 2020 Eastern Division College Band Directors National Association Conference at Temple University. Lutch was recently appointed Interim Associate Director of Bands at the University of Northern Colorado in Greeley.

Wind conducting alumnus Richard Clary, now on the faculty at Florida State University College of Music, was celebrated this fall among three other faculty members who have served as president of the College Band Director’s National Association. The faculty members were honored with the world premiere of a new work performed by the FSU Wind Orchestra Sept. 27 at FSU’s Ruby Diamond Concert Hall. The new work, “Pi’ilani and Ko’olau,” was commissioned by the FSU College of Music with support from Florence Helen Ashby, a patron and alumna who earned her bachelor’s degree in music education from the College of Music in 1957.

Jian-nan Cheng (’14 MM Wind Conducting) has accepted the position of Director of Orchestral Ensembles at Fordham University in New York. She has been chosen to participate this fall in the Dallas Opera's Institute for Women Conductors.

Doug Morin (’19 DMA Wind Conducting) has accepted the position of Director of Athletic Bands at Vanderbilt University in Nashville, TN.

Vu Nguyen (DMA Wind Conducting), assistant professor of Music at the University of Connecticut, Storrs, reports that the University of Connecticut Wind Ensemble, which he directs, was selected as one of six bands to perform at the 2020 College Band Directors National Association (CBDNA) Eastern Division Conference at Temple University. He also was invited to conduct the Connecticut All State Band, April 2020, as well as several regional honor bands in New York, Connecticut, and California. He also is serving as Connecticut’s state chair for the CBDNA. As Commander and Conductor of Air National Guard Band of the West Coast, he completed a concert band tour through northern California and southern Oregon this past summer.

Bachelor of Music piano student Nicole Stankovic, a student of Robin McCabe, served this past year as President of Mortar Board National College Senior Honor Society, Tolo Chapter, the oldest continuing honor society on the UW campus.   With over 200 chapters nationwide, Tolo was chosen to receive the Ruth Weimer Mount Chapter Excellence Award, the highest honor presented to any chapter.   “While we are grateful for this award, we are even more proud that we were able to make an impact on our community in a short amount of time,” Stankovic reports. “We organized several service projects last year targeting homelessness and literacy and honored drama professor Scott Magelssen with our Excellence in Teaching Award. Mortar Board is such a special organization, and I'm thrilled to have been a part of it.”

Doctoral student Minsun Kim, student of Robin McCabe, is a 2019 winner of the Ladies’ Musical Club competition and will perform several recitals in the Northwest in the coming concert season.

Flannery Youngblood, piano student of Cristina Valdes, attended the New York University summer piano intensive and was selected to perform in the honors recital at Steinway Hall at the conclusion of the two-week program.

Alessandra Barrett (DMA, Viola Performance) presented a poster about her doctoral research this past summer at the Pan African Society for Musical Arts Education (PASMAE), held in the Seychelles. Barrett’s research is focused on building a violin/viola pedagogy rooted in sports science and psychology. “By focusing on elements designed to increase strength and stamina in music students, physically, mentally and musically, this pedagogy teaches students how to engage in healthy, well-rounded practice,” she reports.

School of Music Students and Alumni: Send us word of your recent achievements and we will include in an upcoming issue of Quarter Notes. Submit your update here.