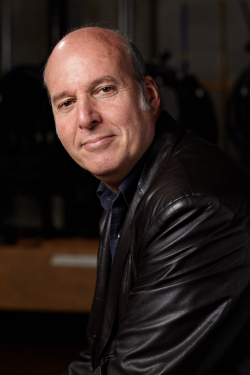 Richard Karpen, director of the School of Music since 2009, completes his term as director on June 30, 2020. Photo: Steve Korn.

Composition professor Richard Karpen’s term as director of the School of Music ends June 30 after 11 years leading the school and its people and programs. During his tenure, the School of Music appointed new faculty in a range of programs, including Percussion Studies, Jazz Studies, and Strings, placed an emphasis on faculty research in the realms of Baroque music and new and experimental music, grew the UW’s Jazz Studies program, fortified longstanding ties between the School of Music and Seattle Symphony, hosted a five-year residency by the Harry Partch Instrument Collection, and brought guest artists from around the world to the UW to work and perform.

This conversation between Dr. Karpen and School of Music publicist Joanne DePue was conducted via email and has been edited lightly.

Q: Your career at the University has encompassed a variety of roles—professor of composition at the School of Music, co-founder of the Center for Digital Arts and Experimental Media, divisional dean of research and infrastructure in the College of Arts and Sciences, and for the past 11 years, director of the School of Music. Throughout your term as director, you have engaged deeply in performance and research activities, including as a member of the faculty improv group Indigo Mist and in ongoing projects and collaborations with composer Juan Pampin of the School of Music and DXARTS.  At various times and sometimes simultaneously, you are a teacher, an administrator, a composer, or a performer: In which role(s) are you most comfortable and productive? How do the various aspects of your work challenge and inform one another?

A: There is a long history of composers playing all of these kinds of roles at the same time going back as far as we know right up to our own time. Throughout history and across cultures, composers/performers have organized concerts, brought together musicians, paid them, while innovating artistically and soliciting financial support for the greater good. Three names off the top of my head: Beethoven, Duke Ellington, Pierre Boulez. I’m not putting myself anywhere near the same league as the many who came before, but being an artist, and perhaps especially a composer, one understands in early career that collaboration with others, teaching, administering, sometimes the leader, sometimes facilitating others to lead, is part of the job. In each of these roles you mention there are always challenges, frustrations, and failures, but mostly, by far, taken together they are truly joyful and gratifying, and it’s a privilege to be able to contribute in these ways. Having known many academic leaders at universities such as ours who are artists, scientists, scholars, engineers, most share this same sense of the integration of their roles. The absolute all-time best part of leading a unit like our School of Music is the teamwork with others to create opportunities for students and faculty to pursue their talents, passions, and dreams. This also includes working with the amazingly dedicated staff who often work behind the scenes but on whose creativity and talents we all depend.

Q: Looking back on the past 11 years, what are some of your proudest accomplishments from your time as director?

A: Our primary mission is to give our students guidance and room to explore, to learn, and mostly to give them the support they need to learn about their own ways of learning. Next, and not at all far behind, is our research mission – the discovery of new knowledge and new methods of discovery. The teaching and research missions are of course intertwined and often act as one. There are so many accomplishments that all of us in the School can be proud of. An overall goal that I feel we have met was to create a more porous and dynamic  boundary between campus and community (from local to global): hosting residencies with the Baroque music group Pacific MusicWorks, with the Harry Partch Instrumentarium, with Ludovic Morlot as chair of orchestral conducting, expanding the musical range and the number of visiting artists and scholars from around the world who have become part of our larger musical family. And in the midst of all this, we have been able to add a significant number of renowned performing artists and scholars as new full time faculty who will be the future leaders of the School.

Q: If you knew now what you didn’t know then, would you still accept the director position? Elaborate.

A: I would not only accept the position, I would not hesitate and ponder the decision so, as I did at the time! It has been a challenging assignment for sure. I started in this role in 2009 during the Great Recession with the need to hit the ground running to reorganize, cut budgets, and find new resources. I don’t take well to limitations on what we are able to do to in the Arts! So, I was not about to simply have the School retrench. With the collaboration of great colleagues and our intrepid students who were ready to keep climbing the mountain in the middle of a cold rain, we emerged with our values intact, more nimble than ever, and ready to soar. I’m grateful to have been a part of that. And now, as the School transitions to its next director, in the midst of another severe and very complicated time of crisis, I feel quite sure that our nimble and spirited ways will bring us through again!

Q: What was the defining moment or turning point that set you on a course toward a life in music?

A: I grew up in a working-class family. My father, who did not finish high school, but who was “street smart,” eventually became an oil furnace service person. I went to work with him when I was quite young and did that work on my own as a teenager and into my early twenties. I worked in the basements of the very affluent and of the very poor. In that kind of work back then, there was very little protection against the unhealthy aspects of this job, and we would emerge from cleaning a furnace covered in soot, soot up our noses and in our throats, fuel oil all over us! My grandmother with her “old-fashioned” ideals made sure that my parents had a piano in our home. I taught myself to play (having learned to read music in public school), learning some pretty difficult music by rote (a Rachmaninoff prelude comes to mind!). Someone noticed that I could play and soon after I had a piano teacher. The turning point was probably the angel (one of many I have had along my path) who said to my parents on hearing me play, “Oh, is Richard taking piano lessons?” I guess it startled my parents, and it set things in motion. I was around eleven years old.

Q: When did you know you were destined to become a composer?

A: It sounds corny, but it’s not something I decided to be. By the time I knew, it was a recognition of a fait accompli. There didn’t seem to be much choice involved. And not really any explanation for it. I was probably around sixteen when I understood this. It was confusing at times, but I had some great mentors, and some unbelievable luck to cross paths with people who pointed in the right directions. I kept thinking that I could do something else, that I should do something else. I still think that way. Maybe I will become an astronaut next year!

Q: What are you reading now?

A: The Hebrew Bible and Italo Calvino’s If on a winter's night a traveler.

Q: What do you plan to read next?

Q: What is the first thing you plan to do on July 1, when you are no longer director?

A: Not check my email, take a walk without my iPhone, listen to music as music.

Q: What is something about you that might surprise people who don’t know you well?

Q: What is something about you that might surprise people who DO know you well?

Q: Beatles or Stones and why (This is a question I half-jokingly ask most professors who came of age in a certain era. But I think you might say “Led Zeppelin.”)?

A: I preferred the Beatles to the Stones, probably because of their use of melody and harmony and also the way the Beatles’ recordings were heavily produced. In terms of music that was part of my youth and that I still listen to and that still moves me, other than great classical music and jazz which I listened to a lot as a teenager, it would be Led Zeppelin. Jimi Hendrix. The Temptations. Jethro Tull. Black Sabbath. Dionne Warwick. Frank Sinatra, and many more.

Q: What are some upcoming projects you are excited about now that you will have more time for your research?

A: An opera with my long-time musical partners, “The Six Tones,” a group consisting of remarkable Vietnamese master musicians and a brilliant Swedish guitarist who is also a master of all things plucked and strummed. We work very collaboratively trying to explore music we don’t ourselves quite understand. Also, a long term creative research project to integrate neuroscience and machine learning into improvisation.

Q: Advice you would offer a new faculty colleague.

A: Be yourself. Don’t wait until you have tenure. We hired you for who you are. Be adventurous. Be the future now.

Q: Advice you would offer a young composer.

A: Learn acoustics and psychoacoustics. Read a lot of fiction and learn a lot about all of the other arts and sciences. There is too much to know but the more you know the more you know. Imagine what your music sounds like to other people, what happens in the imaginations of your audience when they listen to your music, because it is in the inner world of your listeners’ minds/bodies where your music actually comes to life.

Q: What is something a faculty colleague said or did that you will never forget?

Q: What is a film you think everyone should see?

A: There are so many and there is so much to learn from great cinematic works! I’ll just toss out two: Bunuel’s “The Phantom of Liberty” and Hitchcock’s “Vertigo.” And then everything by those two directors and by Fellini, Tarkovsky, Kurosawa, Antonioni…. These are all filmmakers who knew what to do with sound and music by the way!

A: Getting to know the School’s donors (and I mean all of them; the twenty-five-dollar donor and the million-dollar donor) has been an especial joy. It’s not a part of the job I understood very well at first, but it became one of the most meaningful to me personally.  People who write checks to support the School, whether for scholarships for students, support for faculty, gifts of pianos, and so on, do much more than give us the financial means to learn, teach, create. I don’t want to define what that “more” is. It’s just beautiful to be around that spirit and it makes us all better and I thank them all. And last but not least, I thank students, faculty, and staff of the School, those still at the School, those who have moved on, with special reverence for those who are no longer with us on the planet.