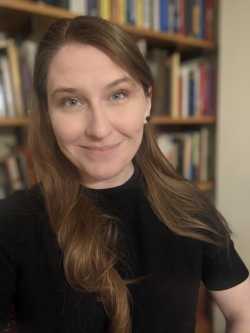 Dr. Paula Horner Harper (’12 MA, Music History; ’19 PhD, Musicology, Columbia University) has been appointed as an assistant professor of musicology at the University of Nebraska, in the Glenn Korff School of Music. She worked with Professor JoAnn Taricani on British Restoration music for her master’s degree, and at Columbia, moved into the field of music and social media, with her first book titled Viral Musicking and the Rise of Noisy Platforms (forthcoming).

Dr. Megan Francisco ('20 PhD, Music History) has accepted a position as Visiting Assistant Professor of Musicology at Wake Forest University in Winston-Salem, North Carolina for the 2021-2022 school year. She also recently published her first article, which is a piece of her dissertation, “Battlestar Galactica and Space Opera: Transforming a Subgenre,” in the February issue of the  Journal of the Society for American Music.

Dr. Jocelyn Mory (’20 PhD, Ethnomusicology) was selected as the recipient of the Distinguished Dissertation Award by the UW Graduate School, for her dissertation “Recentering the Borderlands: Matepe as Sacred Technology from the Mutapa State to the Age of Vapostori,” the culmination of four years of fieldwork with musicians in Zimbabwe. Her advisor was Professor Patricia Campbell. Dr. Mory has also accepted a position as interim director of the International Library of African Music (ILAM), Rhodes University, Grahamstown, South Africa, beginning in January 2022.

Shayna Stahl (‘19 DMA Wind Conducting), has been named Assistant Professor of Music/Director of Athletic Bands/Assistant Director of Bands at the University of Kentucky School of Music, the first woman to hold the appointment. Her history-making achievement and dynamic conducting style landed her on the cover of the June 2021 issue of School Band and Orchestra magazine, which profiled the School of Music alum in an in-depth profile.

Guitarist Gregg Belisle-Chi (‘16 MM Jazz and Improvised Music) has released "Koi: The music of Tim Berne," a collection of solo acoustic guitar compositions by New York City-based saxophonist, composer, and improviser Tim Berne. “He's been a hero of mine for a long time,” Belisle-Chi says, “and I feel so honored that we got to collaborate on this record.” Produced by Berne and David Torn, the release has been well-received by a slew of noted guitarists praising the compositions and musicianship, including Bill Frisell, (“This music knocks me out), Andy Summers (“S,”) and Nels Cline (“masterful and visionary.”) Learn more and obtain the release here.

Former piano students of Professor Robin McCabe report recent successes. Nicole Stankovic (’20 BM/BS Piano) has won second place in the AmericanProtégé Music Competition for Piano and Strings. She will be featured in a recital in New York’s Weil/Carnegie Recital Hall in 2022.  Matt Goodrich (’13 DMA Piano) has been appointed music director of the Sandpoint Conservatory of Music, currently with a student body of 500. Current DMA student Hanyan Zheng has won medals in the online Third World Piano Teachers Association Competition in Finland, and the online Laszlo Spezzaferri International Music Competition.

Daniel Fischer, DMA student in wind conducting, has been named Visiting Associate Director of Bands/Director of Athletic Bands at the University of North Carolina - Charlotte. Fischer and DMA wind conducting student Chris Mathakul served as clinicians at music education conferences of Oregon, Utah, Colorado and All Northwest this past winter, presenting the results and content of the UW Wind Ensemble’s extended performance and recording project with composer Alex Shapiro.