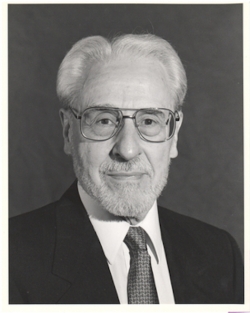 Gerald Kechley, a Seattle composer, long-time University of Washington professor, and church choir director, died July 10 at the age of 102.

He was born in Seattle into the family of pianist Louella and pastor Edward Kechley. Music, family and church were the keystones of his biography.

He is survived by his three sons, David Kechley of Williamstown, MA, and Robert and Stephen of Seattle. Another son Peter died in 1995, and he lost his wife of 69 years, Betty, in 2011.

Until the last months of his life, he continued to write and arrange music, which he loved from boyhood when he idolized older brothers who rehearsed on an array of instruments in their living room and played in a dance band around the community.

He went on himself to sing, play, and study music at UW. After stints at the University of Michigan and Centralia Junior College, he returned to a 32-year career as professor of composition at his alma mater. The University Archives is the home now of the Gerald Kechley Collection, an eclectic body of work that includes 23 boxes of symphonies, orchestral and choral pieces, church and Christmas music that came from his years at Seattle's Greek Orthodox and East Shore Unitarian churches, plus two operas done with his brother Elwyn.

For his 100th birthday, the UW School of Music hosted a celebration that featured his music and many stories about a career that included study under Aaron Copland at the Tanglewood Music Festival in Massachusetts, shepherding his three sons into music, and travel abroad.

One of his devoted UW students Joan Catoni Conlon established an endowed fellowship at UW partly in his name to support students earning advanced degrees in choral conducting. The Kechley family also welcomes donations to the Gerald and Betty Kechley Endowed Scholarship set up to give grants annually to UW composition students.