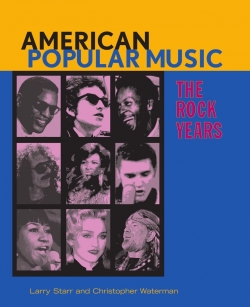 Rock, country, pop, soul, funk, punk, folk, hip-hop, techno, grunge--it's all here. In American Popular Music: The Rock Years, Larry Starr and Christopher Waterman take readers on a fascinating journey through the rich historical and stylistic landscape of American rock. An abridged version of the authors' acclaimed American Popular Music: From Minstrelsy to MTV, this volume includes chapters 8-14 of the longer book along with new introductory and concluding chapters.

American Popular Music: The Rock Years traces the development of rock from its roots in the mid-1940s to its current state in the twenty-first century, integrating in-depth discussions of the music itself with solid coverage of the attendant historical, social, and cultural circumstances. It strikes a balance between musical analysis and social context, showing how rock and American culture have continuously influenced each other over time. Using well-chosen examples, insightful commentaries, and an engaging writing style, the authors highlight the contributions of diverse groups to the development of rock music, explain the effects of advancements in recording technology, and chronicle the growth of rock music as an industry. The book is enhanced by a rich illustration program; boxed inserts on significant individuals, recordings, and intriguing topics; and well-organized listening charts for recordings that are discussed in detail in the text. Remarkably accessible, American Popular Music: The Rock Years is ideal for introductory courses in the history of rock and roll and will encourage readers to become more critically aware listeners of rock music.