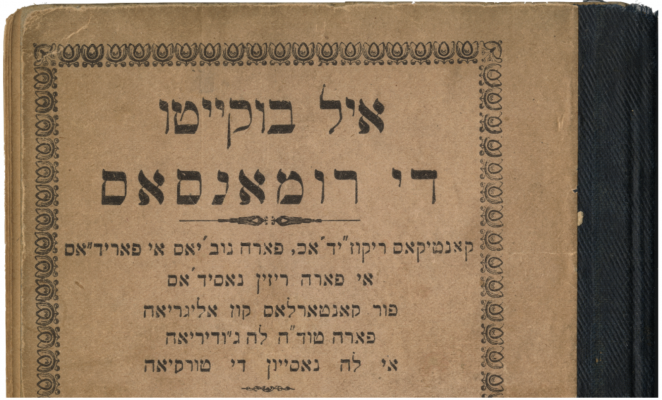 Published in 1926 in Istanbul, the song book El Bukieto de Romansas provided a precious written record that supplemented the existing Sephardic song collections gathered from oral traditions. This collection included various genres of songs to be used for religious activities, domestic educations, personal entertainments, and wedding ceremonies. Some of these songs are still being frequently performed today with variations in lyrics, passing from oral transmission. Compared to the lyrics collected from oral transmission, these old versions of romansas in this book appeared to be more complete in length and the story of the folktales. From the musical aspects, this book presented us a historical soundscape in the Turkish Sephardic community in the early twentieth century with Ottoman’s musical styles; from the linguistic aspects, the texts written in Hebrew rashi letters preserved the traditional characteristics of Judezmo.

In this project, the entire book of El Bukieto de Romansas was transcribed from its original Hebrew alphabet into the Latin Alphabet and then translated into English. During the process of transcription and translation, scholars and local Sephardic community members were consulted, including the owner of this book---Hazzan Isaac Azose, Paco Diez (philologist, ethnomusicologist, and musician), Dr. Anthony Geist (Professor in Spanish studies at UW), and Dr. David Bunis (Professor in Ladino language in Hebrew University of Jerusalem).

The transcription and translation of this book El Bukieto de Romansas will be published through digital platform Manifold. In addition, this project will include video recordings of an interview with Hazzan Azose, as well as Hazzan Isaac Azose singing some repertoires with text sourced from the book. The rediscovery of El Bukieto de Romansas facilitated new opportunities in the study Sephardic music and literature, and would be greatly beneficial to the transmission of traditional Sephardic repertoires.