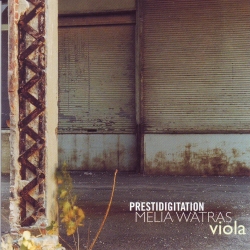 Violist Melia Watras Explores the World of Computer-assisted Music
A review of Prestidigitation by Heather K. Scott
Strings May 2009

Viola soloist and Corigliano Quartet co-founder Melia Watras’ new Prestidigitation is a hefty collection of modern eclectic works. A collection from five composers—Richard Karpen, Juan Pampin, Diane Thome, Heinrich Taube, and Brent Michael Davids—the CD is her second release and follows on the heels of the highly regarded 2004 debut Viola Solo. Although quite different in tone from her first CD, that same virtuosic sound remains in Prestidigitation.

These unusual works were commissioned by the University of Washington Royalty Research Fund especially for this CD and a concert that preceded its release. What’s particularly exciting about the recording, especially the opening track, “Aperture,” is the amount of electronics present throughout Watras’ playing. Karpen, an audio effects expert and pioneer in computer-assisted music, built a special device explicitly for Watras’ recording. He dubs the device the “accelerometer,” and it is a small piece of equipment that is worn on the wrist. Acting as an extension of Watras’ viola, the accelerometer lets Watras adjust the speed and tone of the music.

As Watras moves her arm, it causes the computer to react in a variety of ways, integrating her motions into the music and adding another layer of sound. Specifically, the device tracks small changes in the bow-arm speed and “sends data to the computer where algorithms process the information to determine the nature of the interaction between performer and computer,” as Karpen explains in the CD program notes. The result is astounding, and both challenging and addictive to listen to.

The interplay between woman and machine is seamless and the synthesized sounds accompanying Watras’ playing are otherworldly, dense, and beautiful. The CD closes with a strange, humorous romp of a tune. “Viola Jokes,” with tenor William George, is exactly what the name implies: an oratorio of self-deprecating digs at this much-maligned alto stringed instrument.

Watras, who served as Atar Arad’s assistant at Indiana University for many years (and was later on the faculty), also has studied and taught at the Juilliard School. She was appointed assistant professor of viola at the University of Washington School of Music, where she continues to teach today.