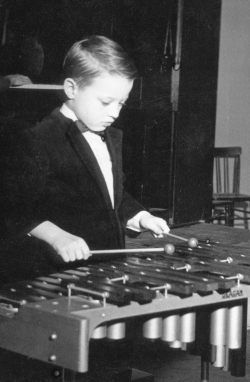 Tom Collier was aged 5 when he made his first public musical appearance.
View gallery

Director of percussion studies at the University of Washington School of Music since 1980, associate professor Tom Collier has performed and recorded with many important classical, jazz, and popular artists, in addition to recording and performing with his own jazz group. He is a veteran of more than 50 years in music -- his first public appearance was at age five, on xylophone, and his first professional performances were made as a nine-year-old marimba virtuoso.

Dan Dean has achieved national and international recognition as a bassist, producer, composer, and as an audio and recording engineer.

Dean also has been a major contributor to music education. He is the author of the widely successful Hal Leonard Series for Electric Bass Method Books 1, 2 and 3, Hal Leonard Electric Bass Studio Series Books 1, 2 and 3, Bass Trax and other related projects. He has been a member of the teaching faculties in Jazz studies and Electric Bass, of Western Washington University, Olympic College and Shoreline College. Dean received his B.A. in 1975 from the University of Washington where he majored in English Composition and Literature.

As one of the pioneers of jazz-rock -- perhaps the pioneer in the ears of some -- Larry Coryell deserves a special place in the history books. He brought what amounted to a nearly alien sensibility to jazz electric guitar playing in the 1960s, a hard-edged, cutting tone, phrasing and note-bending that owed as much to blues, rock and even country as it did to earlier, smoother bop influences. Yet as a true eclectic, armed with a brilliant technique, he is comfortable in almost every style, covering almost every base from the most decibel-heavy, distortion-laden electric work to the most delicate, soothing, intricate lines on acoustic guitar. Unfortunately, a lot of his most crucial electric work from the '60s and '70s is missing on CD, tied up by the erratic reissue schemes of Vanguard, RCA and other labels, and by jazz-rock's myopically low level of status in the CD era (although that mindset is slowly changing).

Born in Galveston, Texas on April 2, 1943 Coryell grew up in the Seattle, Washington area where his mother introduced him to the piano at the tender age of 4. He switched to guitar and played rock music while in his teens. He didn't consider himself good enough to pursue a music career and studied journalism at The University of Washington while simultaneously taking private guitar lessons. By 1965 he had relocated to New York City and began taking classical guitar lessons which would figure prominently in later stages of his career. Although citing Chet Atkins and Chuck Berry as early influences he also took cues from jazzmen such as John Coltrane and Wes Montgomery. He was also inspired by the popular music of the day by the Beatles, The Byrds and Bob Dylan and worked diligently to meld both rock and jazz stylings into his technique. This was reflected on his debut recording performance on drummer Chico Hamilton's album " The Dealer" where he sounded like chuck Berry at times with his almost distorted "fat" tone. Also in 1966 he formed a psychedelic band called The Free Spirits on which he also sang vocals, played the sitar and did most of the composing. Although conceptually the band's music conformed to the psychedelic formula with titles like "Bad News Cat" and" I'm Gonna Be Free" it foreshadowed jazz rock with more complex soloing by Coryell and Sax/flute player Jim Pepper. However, it wasn't until three years later after apprenticing on albums by Vibraphonist Gary Burton and flutist Herbie Mann and gigging with the likes of Jack Bruce and others that Coryell established his multifarious musical voice, releasing two solo albums which mixed jazz, classical and rock ingredients. In late 1969 he recorded "Spaces", the album for which he is most noted. It was a guitar blow-out which also included John McLaughlin who was also sitting on the fence between rock and jazz at the time and the cogitative result formed what many aficionados consider to be the embryo from which the fusion jazz movement of the 1970s emerged. It contained insane tempos and fiery guitar exchanges which were often beyond category not to mention some innovating acoustic bass work by Miroslav Vitous and power drumming by Billy Cobham both of whom were to make contributions to Jazz rock throughout the `70s.

His career, however, began in era of guitar rock, where he was able to rise for a time with legends such as Jimi Hendrix, Carlos Santana, and Eric Clapton. As this era came to a close, his musical expression took him on a diverse journey, and though he did not receive the level of commercial fame the aforementioned musicians had, he was still able to make his mark in music by way of the jazz & fusion world. His music continues to influence musicians and fans internationally and will continue to do so for a very long time.

Born in Sacramento, California, in 1926, William O. Smith began playing the clarinet at the age of ten. In his teens, he initiated the dual life that he has followed ever since: leading a jazz orchestra while also performing with the Oakland Symphony: after high school and a year "on the road" traveling with various bands, he attended Juilliard during the day while playing jazz clubs at night.

Smith studied composition with Darius Milhaud at Mills College in 1946 and with Roger Sessions at the University of California at Berkeley, recieving B.A. and M.A degrees from that school in 1950 and 1952. He also attended classes at the Paris Conservatory (1952-53) and the Juilliard Institute (1957-58). His awards include a Prix de Paris, the Phelan Award, a Prix de Rome, A Fromm Players Fellowship , a National Academy of Arts and Letters Award, a BMI Jazz Pioneer Award, a BMI Jazz Pioneer Award, and two Guggenheims. He taught at the University of California, Berkeley, the San Francisco Conservatory, and the University of Southern California. Since 1966, he has been the director of the the Contemporary Group at the University ot Washington. His association with Dave Brubeck began at Mills College, where he was one of the founders of the Dave Brubeck Octet and responsible for many of the group's arrangements. His SCHIZOPHRENIC SCHERZO, written for the Octet in 1947, was one of the first successful integrations of modern jazz and classical procedures, a style which later became known as "third stream." His work with Brubeck and others in this direction can be heard on a number of the recordings listed below.

He was also among the earliest performers to experiment, in the early 1960s, with new color resources for the clarinet, this after listening to Severino Gazzeloni's similar work on the flute. His DUO FOR FLUTE AND CLARINET (1961) used these techniques, the multiple sonorities very likely being the first of their type to be precisely notated. He was also responsible for a number of other works using these sonorities, including John Eaton's CONCERT MUSIC FOR SOLO CLARINET (recorded on CRI 296), Gunther Schuller's EPISODES, Larry Austin's CURRENT FOR CLARINET AND PIANO, William Bergsma's ILLEGIBLE CANONS (recorded on MHS 3533), Pauline Oliveros' THE WHEEL OF FORTUNE - a theatre piece based on Smith's astrological chart - and Luigi Nono's A FLORESTA (recorded on Arcophon AC 6811). About VARIANTS FOR SOLO CLARINET (1963), Eric Salzman wrote (New York Herald Tribune, March 14, 1964): "William Smith's clarinet pieces, played by himself, must be heard to believe - double, even triple stops; pure whistling harmonics; tremolo growls and burbles; ghosts of tones, shrill screams of sounds, weird echoes, whispers and clarinet twitches; the thinnest of thin, pure lines; then veritable avalanches of bubbling, burbling sound. Completely impossible except that it happened."

Emil Richards, (born Emilio Radocchia) in 1932 in Hartford, Connecticut started playing the xylophone at age six. He is a graduate of Julius Hart School of Music, (now known as University of Connecticut) and Hillard College.

He joined the Hartford Symphony Orchestra while in tenth grade, working under Arthur Fiedler and Fritz Mahler. He began to work around New England with Bobby Hackett, Flip Phillips, and Chris Connor.

In 1952 and 1953 he was stationed in Japan, while serving in the First Cavalry Army Band as assistant band leader.

In 1954 Emil moved to New York where he played jazz gigs with Charlie Mingus, Ed Shaunghnessy, and Ed Thigpen while doing studio recordings for artists such as Perry Como, Ray Charles, and Mitch Aires.