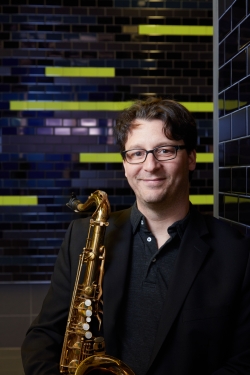 Innovative saxophonist and composer Greg Sinibaldi has established himself as one of the Northwest’s most inventive musicians, embracing a diverse musical world. Whether he’s performing with his own groups, playing in metal bands, or composing new chamber music, he brings forth a characteristic and unique voice each time he performs. Inspired by a wide range of music and art, Greg has developed a unique improvisational language, developing a virtuosic and rich sonic palette.

Inspired by collaborations with many musical innovators Greg has worked and performed with Gunther Schuller, Jimmy Giuffre, Bill Frisell, Wayne Horvitz, Cuong Vu, Ted Poor, Robert Dick, Dave Douglas, Matt Moran, Rueben Radding, Jesse Canterbury and many others. He has toured with a wide range of bands and can be heard on numerous recordings, the most recent being Burn List. In collaboration with clarinetist Jesse Canterbury, his recent record Ascendant, was recorded in a 4-million gallon Cistern. He’s also played an integral role on many recordings including Frieze of Life’sNuclear Frog Pond, Uncle Pooch’s Oneirophrenia and Goat’s Special Agent.

Greg has been the recipient of grants and awards from the Puffin Foundation, Jack Straw Foundation, Centrum, 4Culture, Earshot Jazz and The City of Seattle. He has also been Artist in Residence at the Banff Center, the Atlantic Center for the Arts and Centrum. He studied at the New England Conservatory working with a wide range of artists, including George Garzone, Jimmy Guiffre, and Joe Maneri. While receiving a Masters degree from the University of Washington he studied with Richard Karpen.

Ryan Ferreira joined the School of Music faculty in Fall 2015.  An in-demand New York City-based session guitarist now making Seattle his part-time home base, Ferreira is well-regarded in forward-thinking jazz and improvised music circles, having collaborated and performed with renowned jazz and creative improvisers Tim Berne, Colin Stetson, Chris Dingman, and others. In his work with ambient sound, Ferreira seeks to create “soundscapes that provide a comfortable open environment for the listener." At the University of Washington he teaches electric guitar and works with students in the Jazz and Improvised Music program.