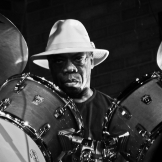 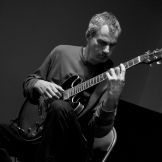 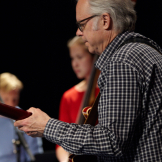 Not a Notecard Event

This musical kinship with Miles Davis has been cited repeatedly in the music press. The New Yorker notes: "Bill Frisell plays the guitar like Miles Davis played the trumpet: in the hands of such radical thinkers, their instruments simply become different animals. And, like Davis, Frisell loves to have a lot of legroom when he improvises--the space that terrifies others quickens his blood."

Andrew Cyrille, born in Brooklyn on November 10, 1939, studied with Philly Joe Jones in 1958 and then spent the first half of the 1960s studying in New York at Juilliard and the Hartnett School of Music. At the same time, he was performing with jazz artists ranging from Mary Lou Williams, Coleman Hawkins, and Illinois Jacquet to Kenny Dorham, Freddie Hubbard, Walt Dickerson, and Rahsaan Roland Kirk, among others. He also played with Nigerian drummer Babtunde Olatunji and worked with dancers. In 1964 he formed what would prove to be an eleven-year association with Cecil Taylor, a gig that brought him new acclaim and established him in the vanguard of jazz drumming.

Starting in 1969, Cyrille played in a number of percussion groups with notable drummers including Kenny Clarke, Milford Graves, Don Moye, Rashied Ali, Daniel Ponce, Michael Carvin, and Vladimir Tarasov. Cyrille formed his group Maono ("feelings") in 1975, with its fluid membership dictated by the forces his compositions called for rather than vice versa. Since leaving Taylor's group, he has also worked with such top-flight peers as David Murray, Muhal Richard Abrams, Mal Waldron, Horace Tapscott, James Newton, and Oliver Lake, was the drummer on Billy Bang's A Tribute to Stuff Smith (Soul Note 121216), notable for being the last studio session of Sun Ra.

An artist-in-residence and teacher at Antioch College (Yellow Springs, Ohio) from 1971 to 1973, Cyrille has also taught at the Graham Windham Home for Children in New York and is currently a faculty member at the New School for Social Research in New York City. His sterling work has earned him a number of grants and awards, mostly notably from Meet the Composer. Additionally, he has an educational video available from Alchemy Pictures.

A musician in the New York area for 30 years, Ben Monder has performed with a wide variety of artists, including Jack McDuff, Marc Johnson, Lee Konitz, George Garzone, Paul Motian, Guillermo Klein, and Maria Schneider. He has conducted clinics and workshops around the world, and served on the faculty of the New England Conservatory from 2002-2005. He was also the recipient of a Doris Duke Artist Award in 2014. Ben continues to perform original music internationally with his own quartet, trio, and in an ongoing duo project with vocalist Theo Bleckmann. He has appeared on over 130 CDs as a sideman, and has released 5 as a leader: Hydra (Sunnyside, 2013), Oceana (Sunnyside, 2005), Excavation (Arabesque, 2000), Dust (Arabesque, 1997), and Flux (Songlines,1995).
People Involved:
Bill Frisell
Cuong Vu
Ted Poor
Luke Bergman
Event Type:
Related Areas of Study:
Guitar
Instrumental Performance
Jazz and Improvised Music
Keyboard
Percussion
Woodwinds and Brass
Information for
Prospective
Students Information for
Current
Students