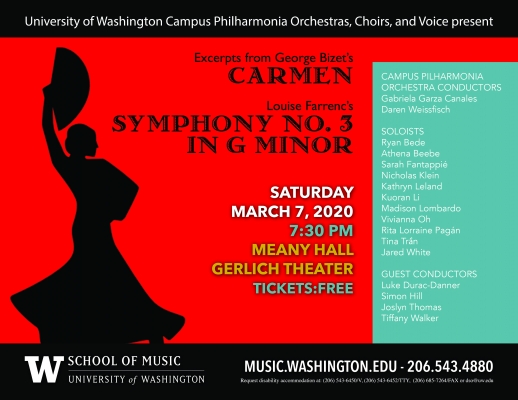 This symphonic program celebrates women on stage and behind the scenes. Program highlights include 19th century French composer Louise Farrenc's Symphony No. 3 in G minor as well as excerpts from George Bizet's opera Carmen with soloists from UW Choirs and the Voice program. The Campus Philharmonia Orchestras are conducted by graduate conducting students Gabriela Garza Canales and Daren Weissfisch.

Gabriela Garza Canales is a Mexican conductor and percussionist living in the United States of America. Currently in her second year of doctoral studies at the University of Washington’s School of Music, Ms. Garza studies under the mentorship of David Alexander Rahbee and Ludovic Morlot. She is co-conductor of the UW Campus Philharmonia Orchestras and assistant conductor of the UW Symphony Orchestra. Additionally, Ms. Garza serves as a guest conductor for the UW Modern Ensemble. In October 2018, the Whidbey Island Orchestra invited Ms. Garza to conduct the west coast premiere of Curci’s Concerto Romantico. In November 2018, Ms. Garza was appointed assistant conductor of Whidbey Island Orchestra.

Prior to her Doctoral studies, Ms. Garza earned a Master’s Degree in Orchestral Conducting from the University of New Mexico (UNM) under the mentorship of Dr. Jorge Pérez-Gómez. She also holds a Bachelor’s Degree in Music Performance with an emphasis in percussion from UNM under the direct instruction of Professor Scott Ney.

Over the summer of 2018, Ms. Garza served as a returning guest conductor with the Albuquerque Philharmonic Orchestra in New Mexico as well as guest conductor with the Universidad Autónoma de Nuevo León Philharmonic Orchestra (UANL) in Monterrey, Mexico. At UANL, she taught two masterclasses on conducting technique and posture. In the spring of 2018, she was granted a conducting fellowship with the Seattle Symphony Orchestra, assisting maestro Ludovic Morlot in the development of a suite of compositions inspired by the sea, featuring works by Sibelius and Britten. Over the past two years, Ms. Garza has conducted multiple orchestras, university ensembles, opera performances, chamber groups and concerto competitions. In July of 2016, Ms. Garza was selected to attend the conductor’s summit at Wintergreen Summer Music Festival, studying under Victor Yampolsky and Erin Freeman.

As an active performer and percussionist in the Seattle metropolitan region, she has performed with the Puget Sound Symphony Orchestra, the UW Modern Ensemble, and the UW Symphony Orchestra. Upcoming commitments include performances in Paramount Theater and teaching seminars at the University Prep.

Daren Weissfisch has conducted professional and student ensembles in the United States, Mexico and Europe for over a decade. From 2013 until 2019 he was the Artistic Director and Conductor of the Orquesta Sinfónica Esperanza Azteca Sinaloa, which is an El Sistema based youth orchestra and choir in Culiacán, Sinaloa, Mexico. Daren was guest conductor for the Festival Sinfónico Noroeste in 2018 and 2016 as well as the assistant director for the 2016 production of Charles Gounod’s opera Romeo and Juliet, under Sinaloense conductor Enrique Patrón de Rueda. The same year he collaborated with French guitarist Jean Bruno Dautaner to record the contemporary guitar concerto Tres en Raya by Spanish composer Antonio Ruíz Pipó under the AdLib MusicMX record label. In 2017 Daren conducted the Sinaloa premier of Horizontes, a work by Mexican composer and Juilliard composition professor Samuel Zyman, with the Orquesta Sinfónica Sinaloa de las Artes, and for the 2017 Sinaloa Cultural Festival and 2018 Chamber Music Series, Daren founded the ensemble Sinaloa Players which presented Stravinsky’s masterpiece Histoire du Soldat, with renowned Mexican choreographer Mauricio Nava and the Danza Joven Sinaloa contemporary dance ensemble.

Daren began his conducting studies in the United States with Glen Adist at the University of Hartford’s Hartt School of Music. He has studied with notable conductors including Edward Cumming of the Hartford Symphony Orchestra, Linus Lerner of the Southern Arizona Symphony Orchestra, Donald Schleicher of the University of Illinois, Carlos Spierer of the Orquesta Sinfónica de Minería in Mexico City, Lior Shambadal of the Berliner Symphoniker, Charles Olivieri-Munroe of the Cracow Philharmonic Orchestra and Gábor Hollerung of the Dohnanyi Orchestra Budafok in Budapest, Hungary. He also spent two summers as a conductor at the Pierre Monteux Festival and School in Hancock, Maine studying with pedagogue and conductor of the Nittany Valley Symphony, Michael Jinbo. Daren is currently pursuing a Master’s degree in Orchestral Conducting at the University of Washington School of Music under the tutelage of David Alexander Rahbee.

Daren is also an oboist and was the second/assistant principal oboist of the Orquesta Sinfónica Sinaloa de las Artes from 2010-2019 as well as soloist playing oboe concertos by Mozart, Strauss and Bach. He is a substitute player in Seattle with the Bainbridge Symphony Orchestra and the Orchestra Seattle.