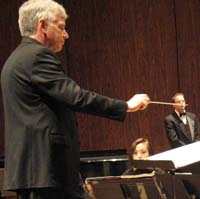 School of Music faculty from both the academic and performance divisions will be in the spotlight when the College Band Directors National Association holds its national conference in Seattle March 23 through 26.

The biennial event, which will be held this year on the University of Washington campus and in downtown Seattle at Benaroya Hall, has not been held on the west coast in nearly 40 years, says conference organizer Tim Salzman, director of the UW band program.

In addition to performances by collegiate wind ensembles from around the country, the conference will feature research presentations, keynote addresses by School of Music professor Larry Starr and Seattle Symphony Music Director Gerard Schwarz, and a concert by the UW Wind Ensemble at Meany Theater March 26 featuring new compositions by School of Music faculty Huck Hodge and Cuong Vu. Faculty performing on the concert include Donna Shin, flute; Ko-Ichoro Yamamoto, trombone; and Cuong Vu, trumpet.

"The Hodge work, from the language of shadows, will be a world premiere, one of the works that he is writing as a part of his Rome Prize," Salzman says. "The piece is also the result of a consortium commission that I put together with 23 other American universities and colleges. We are extremely excited about this multi-media piece, constructed to accompany scenes from the 1927 F.W. Murnau silent movie Faust." Hodge, a UW composition professor, is the recipient of a 2010 Rome Prize in composition, one of music's most prestigious honors. He is spending the 2010-11 academic year at the American Academy in Rome, but will return to Seattle for the premiere performance. The Wind Ensemble will also collaborate with the Cuong Vu Trio--featuring Vu on trumpet, Luke Bergman on bass, and Ted Poor on drums--on Cuong Vu's composition Solitary Confinement.

Another consortium commission on the program--organized by Professor Salzman along with 33 colleges and universities--is Precious Metal, a concerto for flute and winds by D.J. Sparr. School of Music Professor Steve Morrison will guest conduct the UW Wind Ensemble on that piece accompanying faculty artist Donna Shin, flute.

Admission to the March 26 concert, which is at 2:30 p.m. in Meany Theater, is free and open to the public.

At the final convention concert, also on March 26, the UW Wind Ensemble, at the invitation and under the baton of Gerard Schwarz, will perform in Benaroya Hall with the Seattle Symphony as a part of the SSO's regular Saturday evening concert, a culmination of the orchestra's weeklong celebration of the music and life of Alan Hovhaness.

For more detail and a full conference schedule, visit the conference website here.