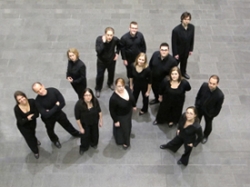 Dr. Wyers founded Solaris on a question: “What happens when our voice—our means of expression—is transformed? Do we seek this transformation, or is it imposed upon us? And what is the effect of one of the greatest transformational forces of our time—technology?”

“I often program music that parallels issues I am passionate about, or concerned about,” she says. “Solaris allows me to explore how technology impacts all aspects of life, including music.”

The Solaris Ensemble is twelve professional singers, many of them graduates of the School of Music now performing in regional opera, as leads in music theater productions, and in Seattle's top professional choirs. Funding for the project is through the UW Royalty Research Fund, which supports new directions in research by UW faculty.

Selections on the April 14 concert include premiere performances of works by New-Jersey based composer Frances White, California Institute of the Arts composer Anne LeBaron, and post-minimalist composer Ingram Marshall, as well as a newly commissioned arrangement of Wedding March by composer Meredith Monk, acclaimed for her pioneering work in extended vocal techniques. Both White and LeBaron will be present for the performance.

“The composers were given significant leeway in choosing how to approach their works, and in the end, only two of the works—pieces composed by White and Le Baron—ended up to be electro-acoustic,” Wyers says. Monk’s Wedding March and Marshall’s Hackney Tune are for 12 solo voices. LeBaron's work, Floodsongs, sets three poems by Douglas Kearney from his book The Black Automaton. Performance of the work will involve live processing of the voices alongside a previously programmed computer part incorporating frog calls and sounds of water.

“As the performers sing into microphones, their voices will be mixed into Anne LeBaron's computer and processed, then sent out into the hall along with sounds created for the piece,” Wyers says. White's work, far, still, is based on three poems about the moon by Percy Shelley, A.E. Housman, and Sara Teasdale, and is written for pre-electronic sound, cello, and 12-voice ensemble. White is known for her sonorous film scores, such as the music she composed for Gus Van Sant’s film Paranoid Park.

While the group is at present focused intently on preparing for its debut performance, its fundamental purpose is much broader and grander in scope. Along with commissioning and presenting innovative and virtuosic vocal literature, Solaris Ensemble seeks nothing less than to advance the progress of contemporary music for voice.

“Singing is considered to be the most ancient musical form of expression,” Wyers says. “Technological advances have allowed twenty-first century innovations in electro-acoustic music, blending computers with voices in new ways, yet choral music has less often used electronics, in comparison to instrumental forms.” One reason for that, she says, could be the fact that singing demands that players be able to find their pitches in their heads.

For the April 14 performance, each player will, indeed, be tasked with finding his or her own pitch. “All four works were composed for twelve voices, one per part,” Wyers says, “so each singer is learning a unique part for each piece.”

With a dozen voices performing twelve-part scores, in full surround sound, accompanied by sounds from nature, enhanced by tools of technology, Solaris Vocal Ensemble dares to take risks, in the hope that adventurous endeavors will yield dazzling and lasting results. The aim, Wyers says, is to “encourage a renaissance of innovation in the field of choral music.”