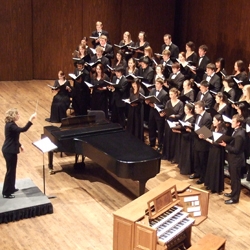 The University Chorale, conducted by Giselle Wyers, earned a third place spot this past summer in the college and university division of The American Prize in Choral Performance. The group submitted for consideration its recent CD release “Climb,” a compilation of recordings made at St. Joseph's Cathedral from 2008 through 2011.

The American Prize is a series of new, non-profit national competitions in the performing arts providing cash awards, professional adjudication, and regional, national, and international recognition for the best recorded performances by ensembles and individuals each year in the United States at the professional, college/university, church, community, and secondary school levels. Administered by Hat City Music Theater, Inc., a nonprofit organization based in Danbury, Connecticut, the American Prize was founded in 2009 and is awarded annually.

The award is only the latest honor to recognize the excellence of the Chorale. The group also has been invited to appear, along with the UW Chamber Singers, as the only American choir in the Latvian Song Festival in Riga, Latvia, during the summer of 2013.