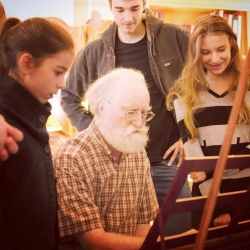 Recent activities by School of Music faculty reveal a fascinating range of research directions. The below updates offer a narrow glimpse of recent faculty achievements.

• Received a faculty grant from the UW Royalty Research Fund to continue archival work on his forthcoming book, Brahms in Boston: A Study in the Reception of Art Music in Nineteenth- Century America.

• Collaborated with UW colleague Geoffrey Boers and University of Missouri faculty member Robert Bode in presenting a symposium at the UW last spring, “Performing Brahms’s Requiem as Brahms Did,” co-sponsored by Choral Arts and the School of Music.

• Celebrated the 25th season of his well-known chamber music series, Gallery Concerts, which presents music of the Baroque, Classical, and early Romantic eras on period instruments and in historically informed styles.

• Completed construction of the Seattle Early Keyboard Museum (SEKM), a private facility to house his large collection of historic instruments (1700–1869). The museum is open to local piano teachers to schedule classes with Bozarth and his wife, pianist Tamara Friedman, to introduce their students of all ages to the instruments. Early pianos from the collection can regularly be heard on Gallery Concerts and in the Mozart and Rossini productions of the Seattle Opera.

• Served as president of the College Music Society

• Served as chair, Smithsonian Folkways board

Joël-François Durand, Composition
• Awarded a commission from the Seattle Symphony Orchestra for a new work to be premiered, along with works by UW composition faculty colleagues, in October 2015

• Presented a new audio tonearm, the Kairos, at the High End Audio show in Munich, Germany (May 2014).

• The associate professor of voice and director of the opera workshop at UW was one of nine American teachers instructing voice at the six-week American Institute of Musical Studies program (AIMS) in Graz, Austria this summer. AIMS is one of the oldest and largest summer vocal music programs dedicated to preparing young singers for professional auditions in Europe.

• His portrait CD, Life is Endless Like our Field of Vision, was released on the New World record label, NYC

• Awarded first prize in the ISCM League of Composers competition

• Awarded numerous commissions from foundations, institutions, and ensembles, including:

• University of Chicago for the 50th anniversary of the Contempo series

Richard Karpen, Composition and Director
• Continued longtime collaborations with the Six Tones Ensemble, a trio of Vietnamese and Swedish musicians who have worked with the composer on various multi- media projects. Collaborations in 2013- 2014 included video and film work, live improvisational performance with the JACK Quartet and UW faculty musicians, and presentation of a world premiere, Nam Mai, commissioned by Seattle Symphony for its 2014 Celebrate Asia series.

• Created a video channel on You Tube for students of the double bass, presenting 18 tutorials of all the orchestral solos for the instrument, including Mahler, Stravinsky, Beethoven, Haydn, and others.

• Continued work with his chamber group The American String Project, which launched in May 2014 an educational program to offer free chamber music concerts to middle and high school students featuring visiting artists from around the country. The program continues in May 2015.

• Performed the entire cycle of Beethoven sonatas for piano and violin, “The Beethoven Project,” with Maria Larionoff, in three School of Music recitals, as well as additional recitals in Washington state. The McCabe/Larionoff duo is set to record the cycle in June of 2015.

• Produced and narrated “Circle of Friends,” a three-concert theme series at the School of Music, featuring UW music students performing works of Felix and Fanny Mendelssohn, Clara and Robert Schumann, and Johannes Brahms.

• Co-directed, along with colleague Craig Sheppard, the fifth summer session of the Seattle Piano Institute, drawing gifted students from throughout the United States, Canada, and Asia.

• Performed a feature solo concert at the inauguration festival of the International Guitar Research Center at the University of Guildford in Surrey, UK

• Completed two solo concert tours of the UK and a concert residency in Spain, including the first solo guitar performance at the Cathedral of Santiago de Compostela since Segovia.

• Served as performing and teaching faculty at Guitar Fest West in Calgary, AB and the Northwest Guitar festival in Spokane, WA.

• Performed as onstage soloist with Seattle Opera for performances of Don Giovanni, including live appearance on KING 5 TV.

• Presented a workshop, “The Pedagogical Basis for Vocal Cool-Down Exercises,” at the Voice Foundation Symposium in Philadelphia.

• Presented “A Practical Guide for Working with Voice Injuries” at the National Association of Teachers of Singing conference in Boston:

• Conducted the United States Air Force Band of the Midwest

• Was inducted into the Drum Corps International Hall of Fame

Carole Terry, Organ
•Staged concert performances and master classes abroad, including recitals in Collescipolii and Solomeo, Italy (May 2014) and concerts in Korea at Seoul Presbyterian Theological Seminary, Seoul University, and Keimyung University, as well as master classes at Yonsei University and Korean International School of the Arts.

• Concert and teaching appearances during fall 2014 included concerts at Luther College in Decorah, Iowa (concert) and the University of Houston, Houston, Texas (concert and master class).

The violist and chair of the UW strings program performed world premieres in major cities, completed recording projects, and engaged in other academic and scholarly activities including:

• A performance with violist Atar Arad at Indiana University

• Performances with world premieres in cities such as Seattle, Chicago, New York, and Copenhagen.

• Recorded a CD for of new viola music: solos and duos; in New York City (for upcoming release)

• Traveled to Stockholm, Sweden in October to help facilitate connections with the international community of choral professionals. Wyers was among 14 American conductors awarded a fellowship with the 2015 International Conductors Exchange Program, a program hosted by the American Choral Directors Association (ACDA).