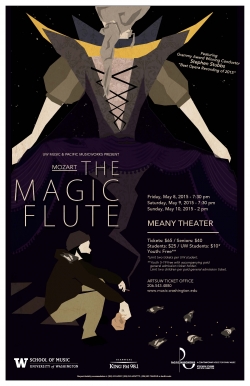 Expect a most contemporary interpretation in Dan Wallace Miller and Karen Hartman’s new translation of The Magic Flute, the second in an ongoing collaboration between the UW School of Music and Seattle production company Pacific MusicWorks running at Meany Theater May 8-10.

Miller, a UW Drama alumnus who has made a name for himself locally with his fledgling Vespertine Opera Theater, presents a contemporary take on Mozart’s beloved masterwork, with new dialogue created by the award-winning playwright and librettist Karen Hartman, a UW School of Drama artist-in-residence with extensive credits in the New York theater world and beyond.

Set in Seattle in 2015, the staging has been described by one cast member as “a vaudeville-meets-Descartes experience complete with steam punk Queen of the Night.” In other words, the production should hold true to PMW’s fondness for presenting timeless music with a modern twist.

Soprano Cyndia Sieden, as Queen of the Night, returns to a signature role she has sung at the New York Met and other great opera houses worldwide, and several cast members last seen at Meany in UW Music and PMW’s co-presentation of Handel’s Semele in 2014 make return appearances in this production, conducted by Grammy winning conductor Stephen Stubbs.

UW Music and Pacific MusicWorks’ co-production of The Magic Flute shows at Meany Theater Friday and Saturday, May 8 and 9 at 7:30 p.m. and Sunday May 10 at 2 p.m.  Tickets and more details are available here.