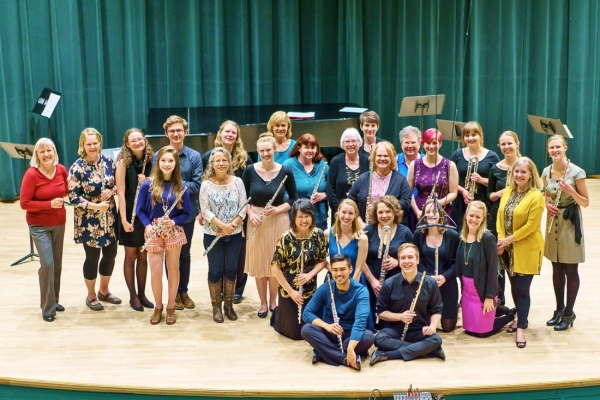 When not taking the lead in music festivals and competitions, UW Music students and alumni are engaged in furthering their craft, advancing research, and venturing far afield in search of new knowledge. Below are but a few recent accomplishments and activities of our current and former students.

Students of Donna Shin swept the Montana Flute Association’s Young Artist Competition at the University of Montana in Missoula this past April. UW students (senior Joyce Lee, senior Laura Colmenares, and freshman Audrey Cullen) won first, second, and third prizes (respectively) in the competition, the first the society has hosted as part of its annual flute festival. Winners received cash awards and the opportunity to perform in the festival’s evening concert.

Jazz Studies student Remy Morritt won a new drumkit when his band, Seattle hip-hop group Cosmos, took first prize in the Experience Music Project’s 2016 Sound Off! battle-of-the-bands competition for young musicians. In other winnings, the band secured performance spots at the region’s two leading music festivals—Bumbershoot and Sasquatch!—as well as musical gear, industry consultations, and other prizes. Cosmos was among more than 100 bands applying for 12 spots in the 15th annual competition, which has helped to launch the success of local notables such as the Lonely Forest, Schoolyard Heroes, Kithkin, and others.

Composition alumnus Yigit Kolat (’15, DMA, Composition) will spend a month in the picturesque Italian fishing village of Bogliasco near Genoa this summer creating a new work with funding from the Bogliasco Foundation, which offers residencies to individuals demonstrating notable achievement in the arts and humanities. Kolat, a former student of Joël-François Durand, is among about 50 fellows in a range of disciplines to be awarded the prestigious fellowship, which has been awarded to more than 850 fellows from 55 countries over the past 20 years. The Foundation frequently hosts special events in Italy and New York featuring projects developed by fellows in residence.  Bogliasco Fellows also regularly exhibit, perform, and publish their acclaimed work around the globe.

Alumnus Eric Rynes (’02 MM, Strings) continues to make a name for himself in the world of contemporary music with a recent release, “Mikka and Other Assorted Love Songs,” a collection of works for solo violin and violin with computer-realized sounds on the Albany Records label. Along with pieces by Pierre Boulez, Elliott Carter, Kotoka Suzuki, Iannis Xenakis and other iconic contemporary composers, the release includes Rynes’s performance of School of Music professor Joel-Francois Durand’s Roman. Rynes, who has performed as concertmaster and concerto soloist with the Northwest Symphony Orchestra, with the quartet Tangabrazo and as a sideman with Sufjan Stevens and Rod Stewart, among others, has most recently served as principal violinist of the Seattle Modern Orchestra. In addition to his work in music, Rynes maintains a parallel career as a senior computational scientist at Seattle’s Altius Institute for Biomedical Sciences.

Yoojeong Cho, a vocal performance major who studies with Dr. Kari Ragan, is one of 11 winners of a 2016 UW Library Research Award for Undergraduates. The awards are granted annually to UW undergraduates who demonstrate outstanding library research in the writing or creation of course projects. Each recipient received a $1,000 cash prize and recognition at a special award ceremony on June 7. Yoojeong’s essay, “The Gaze and the Circumvention of Power in Richard Strauss’ Salome,” which she wrote as her final project in Judy Tsou’s course, Muhst 419 (Power in Operas) in Winter 2016, won in the senior, non-thesis category. In addition to her music studies, Yoojeong is earning a second degree in Italian and is on track to graduate in 2017.

Vijay Chalasani, DMA student of Melia Watras, has scheduled an active summer of festival activity, beginning in early June when he attends the Summer Institute for Contemporary Performance Practice at the New England Conservatory in Boston. He also is enrolled at the Pierre Monteux School in Hancock, Maine, this summer and performs at the Lake Tahoe Music Festival in Tahoe City, California. Chalasani recently soloed with the Rainier Symphony performing the Walton Viola Concerto.  He can be seen in performance at the School of Music in 2016-17 as a member of the Evergreen Trio, co-winners of the UW Strings and Piano Chamber Music Competition.

In other news from the UW Viola Studio, Robert Babs (BA  English, History) was recently named the new program director of Marrowstone Music Festival, the regional summer orchestra training program for young musicians. His appointment begins September 2016.   Emmeran Pokorny, BM, was co-winner, as a member of the Corda Quartet, of the UW Strings and Piano Chamber Music Competition. The group may be seen in two performances at the School of Music in 2016-17.

Anita Kumar (PhD student in Music Education) and Cory Meals (PhD candidate in Music Education) have been invited to present a session on student teacher assessment at the 2016 Midwest International Band and Orchestra Clinic in Chicago. They also will be presenting new research on conductor movement at the 14th International Conference on Music Perception and Cognition in San Francisco.

Erin Howard (MA, Music Ed) will present her research on the secondary music classroom climate at the 2016 conference of the International Society for Music Education in Glasgow, Scotland.

Heather MacLaughlin Garbes ('08 DMA Choral Conducting) was recently appointed Affiliate Assistant Professor in the Department of Scandinavian Studies, Baltic Studies Area, at the Univeristy of Washington. Dr. Garbes is also the Founder and Artistic Director of the Mägi Ensemble, a professional women's chamber vocal ensemble that performs and records works from Estonia, Latvia and Lithuania. The Mägi Ensemble recently released their first CD "Baltic Sounds" and will be touring to Riga, Latvia in fall of 2016.

DMA Choral Conducting candidate Elizabeth MacIsaac led a summer tour to France with her Canadian women’s choir, Ensemble Laude. A première choir from Vancouver Island, Ensemble Laude was among the international choirs invited to perform at the prestigious Choralies festival in Vaison-la-Romaine, France. The group also made tour stops in in Nice, Aix-en-Provence, and  Corsica.  In other news, MacIsaac was the 2016 recipient of the Elizabeth Massey Award, granted by the Canadian Federation of University Women, for her upcoming year of studies at the UW.

Brad Pierson (DMA, 2014) completed his first year as director of choral activities at the University of Toledo in Ohio and was awarded a grant from the University of Toledo’s Kohler International Fund to support travels to Germany in May 2016 to continue research on composers Hugo Distler and Arnold Mendelssohn. Pierson also recently presented at the 2016 Northwestern and Southwestern Regional Conferences for the American Choral Directors Association.

Ryan Ellis, candidate for DMA in Choral Conducting, is touring the Baltic states this summer as leader of ChoralSounds Northwest. He joins Dr. Geoffrey Boers in a performing tour through all three countries. Ellis returns to Seattle Pacific University in fall quarter to teach classes and direct SPU’s Men's Choir.

Jeshua Franklin (’16 DMA Choral Conducting) has accepted an appointment for fall 2016 as director of choral activities/assistant professor of music at Bethel College (Indiana), a private, comprehensive liberal arts college that has been ranked as a "Top Tier College" and one of the "Midwest's Best Baccalaureate Colleges” by U.S. News and World Report.  He also was appointed for fall 2016 as Associate Artistic Director of Musical Arts Indiana, an organization that provides performance and educational opportunities for singers and instrumentalists throughout northern Indiana and southern Michigan.  In this role, he will help guide the organization as a whole and take an active conducting role with Vesper Chorale, the organization's premier choral ensemble.

Connor Ritchie was a finalist at the 2016 Northwest Guitar Festival Competiton, held this year in Moscow, ID.  A freshman from Albuquerque, NM, Connor is pursuing a BM in classical guitar with Michael Partington.

Giuliana Conti (MA student, Music Ed) has been invited to teach music for six weeks in a school in Chamwino village, Tanzania, as part of a partnership between the UW School of Music and the University of Dar es Salaam.  She will present theoretical dimensions of children’s musical cultures at the East African Symposium in Ethnomusicology.

Chris Mena (MA student, Music Ed) was appointed liaison to Gitameit Academy, Yangon, Myanmar, where he will reside for six weeks this summer in dialogue with faculty and students in the curricular re-design of a tertiary-level music program that balances local traditional genres with Western art, jazz, and popular music.  Mena leads a group of graduate students (Giuliana Conti, Will Coppola, Mike Kohfeld) who Skype weekly to faculty and students at Gitameit in discussion of music, transmission and pedagogy. This work is part of a partnership between institutions arranged by the UW Office of Global Affairs.

Will Coppola (PhD student, Music Ed) will present research in July-August on humility and egoism in the lives of performing and teaching musicians, at the East African Symposium in Ethnomusicology (University of Dar es Salaam) and the International Society for Music Education (Glasgow, Scotland).  Coppola also recently submitted an article on children and popular music for the Sage Encyclopedia of Popular Music.

Skuli Gestsson (MA student, Music Ed) will present by invitation at the Modern Band Summer Institute in Colorado on popular music pedagogy.  His experience is as bassist and singer of the Icelandic band, Ditka, which has released its fifth album.  His interest is in the elemental features of informal learning as a result of student agency and the reduction of teacher controls in school and after-school programs in music.

Andre Elias, doctoral student in Ethnomusicology who studies with Shannon Dudley, has accepted an appointment as assistant professor at Hong Kong Baptist University, beginning in Fall 2016.

Ethnomusicology PhD candidate Michiko Urita has published by invitation important ethnomusicological insights on “Transreligious and Intercommunal: Hindustani Music in Classical and Contemporary North India” in the in May 2016 issue of the journal Common Knowledge, published by Duke University Press.

Ethnomusicology MA-PhD student Solmaz Shakerifard  has been awarded a competitive fellowship by the Roshon Cultural Heritage Institute, for excellence in Persian Studies. She will be pursuing scholarly work and performance in Teheran this summer, following her participation in the intensive workshop on the comparative methods in music research at the Max Planck Institute, Frankfurt, Germany, for which she was offered a full fellowship.

Claire Anderson (PhD candidate, Ethnomusicology) has begun her fieldwork on the topic of bluegrass in Sweden. She will be posted at Uppsala, with   work also in Stockholm and Malmo, and in various bluegrass festivals across the country. Her fieldwork is supported by grants from foundations in both Sweden and the U.S.

Jocelyn Moon (PhD candidate, Ethnomusicology) begins her year-long Fulbright study in study of matepe mbira in a small village at the northeastern border of Zimbabwe with Mozambique.  She and husband Zack Moon received the national prize in Applied Ethnomusicology offered by the Society for Ethnomusicology for earlier work on the topic.

Bonnie McConnell (’15 PhD, Ethnomusicology) joined the music faculty at Australian National University, Canberra, where she is teaching and conducting research on various topics of ethnomusicology, including specialized research in music and health in West African societies.

Ethnomusicology PhD candidate Jim Morford has submitted two articles to the Sage Encyclopedia of African Culture on music and dance in Guinea and other areas of West Africa.